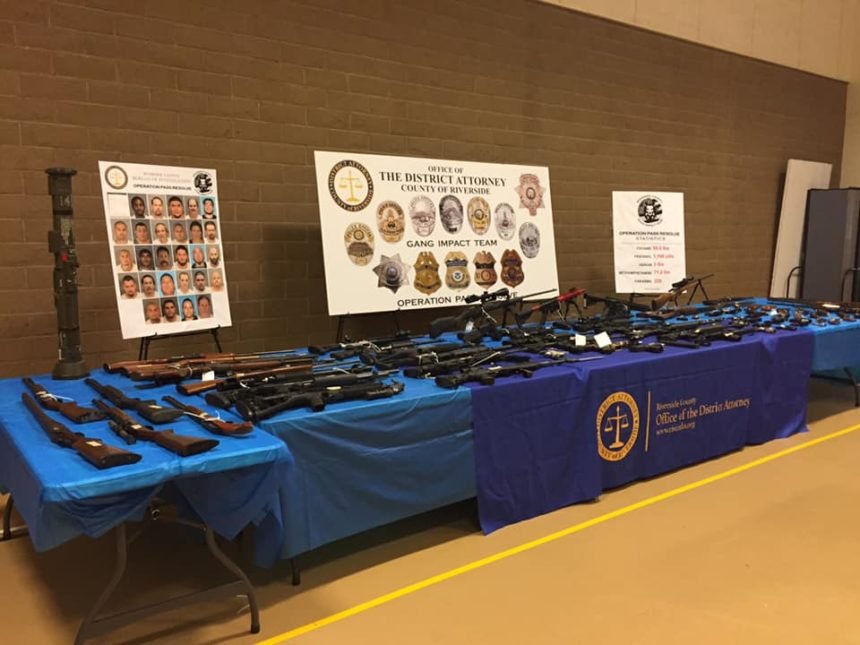 As part of "Operation Pass Resolve," 19 teams of local, state, and federal law enforcement officers target 65 locations from the Banning-Beaumont Pass to the Coachella Valley, and Hemet and Menifee areas, as well as in San Bernardino and Los Angeles counties.

The operation resulted in nearly 100 firearms and countless narcotics being seized by law enforcement.

Just this morning, the Riverside County Gang Impact Team served a search warrant at a home off east 13th Street in Beaumont. The raid led to the recovery of four handguns, two handguns, black tar heroin, and more.

Riverside County District Attorney Mike Hestrin said much of the operation is linked to the drug cartels operating across the border.

23 of 29 targeted suspects were arrested. Law enforcement continues to search for the remaining 6 suspects.

"Everybody clocks back in tomorrow and goes back to work doing the exact same thing," said Robert Goesch, an assistant special agent with Homeland Security.

Law enforcement also found suspects that weren't specific targets. During one probation search in Hemet, a man with an outstanding warrant for murder and vehicular manslaughter was arrested. The man was charged for drunk driving when his vehicle struck a motorcyclist in Menifee in 2018.

Officials said the primary focus of "Operation Pass Resolve" was to reduce crime and violence while targeting organized crime, wanted felons, and those trafficking weapons and drugs.

The Riverside County Gang Impact Team is supervised by the District Attorney’s Bureau of Investigation and is made up of investigators and agents from the DA’s Office, Homeland Security and Investigations, Bureau of Alcohol Tobacco and Firearms, U.S. Border Patrol, the California Department of Corrections and Rehabilitation’s Special Services Unit, and detectives from the Beaumont, Banning, Hemet, Palm Springs, Cathedral City, Desert Hot Springs, and Corona Police Departments.