The two officers were part of the tactical team that was involved in a raid of a home on January 28, 2019 that killed Rhogena Nicholas and Dennis Tuttle and their dog in the home. The raid injured several Houston officers on the team, including Goines.

Prosecutors said Goines lied to obtain a warrant for a “no knock” raid from a municipal judge and misrepresented the victims’ drug activity, threat level and other factors. He claimed a criminal informant bought heroin from a man at the address the day before and that the man selling drugs was known to have a gun, among other things, according to Ogg.

That meant there was no need for police to knock before entering the home, the prosecutor said.

Bryant is accused of misrepresenting facts surrounding the scene and the purchase of the drugs, according to prosecutors. Bryant gave a supplement to the original report that contained falsehoods, the prosecutor said.

The officer allegedly said he had previously assisted Goines in the investigation of the home, and during the investigation he found baggies with a brown substance he believed to be heroin that matched the heroin bought by an informant before the raid, according to Ogg.

Prosecutors plan to conduct an investigation into the shooting itself and the other members of the squad.

“Each officer on that squad, including those seriously injured, understand that they are under a prosecutorial microscope,” Ogg said.

In a statement, Goines’ attorney, Nicole DeBorde, said: “We look forward to our day in court.”

CNN has reached out to Bryant’s attorney but has not yet heard back. 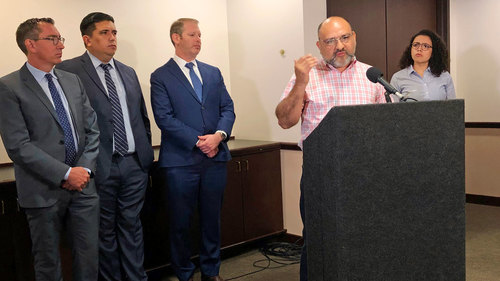