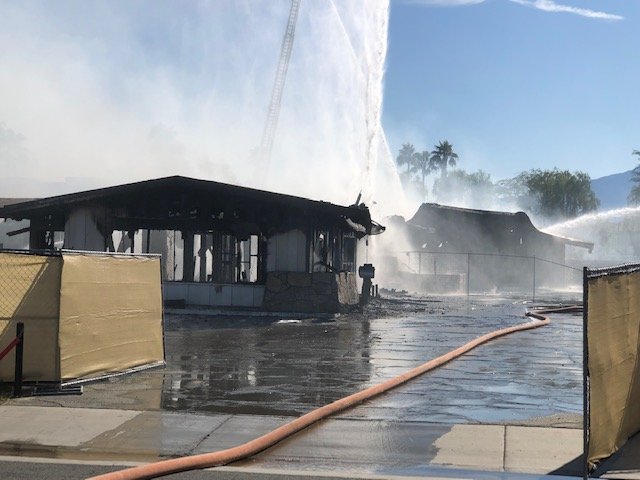 Cal Fire officials reported an unoccupied building was on fire just before noon in the 42-000 block Washington Street.

The fire was contained by 1:30 p.m. and crews remained on scene until 3:30 p.m. There were no reports of injuries.

Residents in the area rushed to the scene. Cody Cross, from Palm Desert, was one of the first people on scene.

Battalion Chief of Cal Fire, Gad Amith, confirmed no one was inside the building when the fire broke out.

"So far the good news there are no injuries firefighters or civilians and the cause of the fire is under investigation," said Amith.

“I heard from multiple people that there was homeless inside doing drugs or whatever they do but I do see a lot of homeless people going in and out of the building," said Cross.

Moises Garcia, who lives around the block, said he has seen the homeless in the area.

"Well for more than a couple of days some homeless people walking around the shopping center," said Garcia. "They went inside and slept inside," said Garcia.

Garcia expresses his concerns about what might come next for the property.

“Well, I feel bad first because it will be nice to have a nice restaurant like The Denny’s restaurant here and I feel bad now that all the plans are destroyed," said Garcia.

No other information was released other than the fire is under investigation. Stay with News Channel 3 for any new developments.