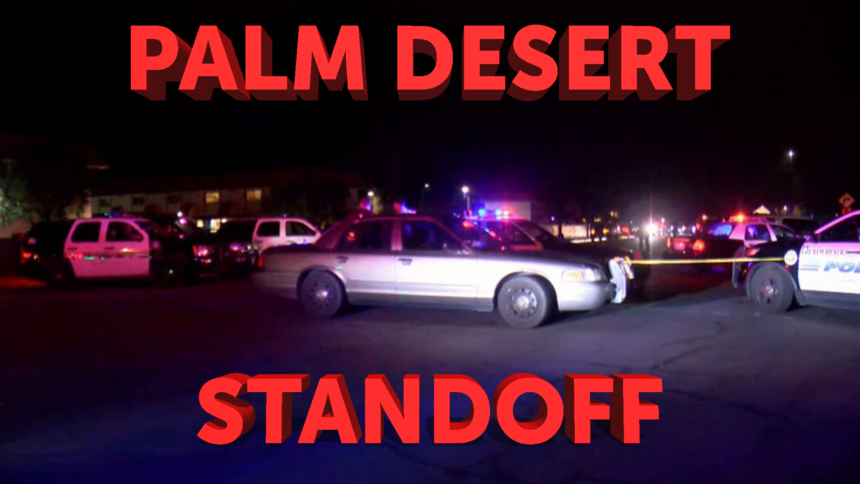 The Riverside County Sheriff's Department has released more information on what sparked a lengthy standoff at a Palm Desert apartment complex on Tuesday night.

Around 8:30 p.m. on Tuesday night, a massive police presence swarmed to Desert Oasis Apartments, located at 77777 Country Club Drive. A barricaded standoff followed until about 11:30 p.m., when Riverside County Sheriff's deputies informed apartment residents that there no longer was a threat.

On Wednesday morning, RSO Public Information Officer Deputy Robyn Flores sent along updated information to News Channel 3, detailing that one suspect was detained in the standoff, and one remains outstanding.

The standoff was sparked after a series of reports came in about local robberies and suspects brandishing a firearm in Palm Desert.

The suspect vehicle description was the same in all three reported incidents.

Deputies located the vehicle and attempted an enforcement stop, and a pursuit followed. The suspect vehicle crashed near the intersection of Harris Lane and Washington Street, right by Desert Oasis Apartments, and fled on foot into the complex grounds.

Witnesses in the area detailed what they saw to News Channel 3's Jake Ingrassia.

"We seen the car over there so I'm assuming it was a car chase they must have lost control got out on foot Suspect came down here hop the wall, cops chasing them so right now I think it's just a game of hide-and-seek," said Donavan Archer, an eyewitness.

Residents say police conducted a door-to-door search at the apartments and informed some to shelter in place.

"The police are going door-to-door they're telling them, 'Get down, shelter down, shelter down. Go lay in the bathtub,' and then they're out there right now screaming, 'Come out, come out with your hands up' with a loudspeaker," said Sarah O'Keefe, a Desert Oasis resident.

Some residents were even forced to evacuate their homes.