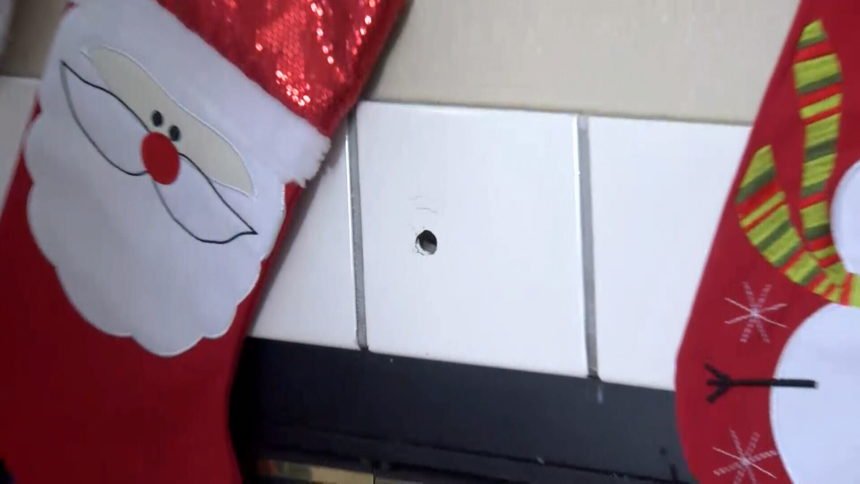 One family is now speaking out after a Riverside County Sheriff's deputy discharged his gun at the home in unincorporated Desert Hot Springs. The bullet grazed the front door and penetrated a wall inside the home.

Marco Garibay lives at the home with his wife and two children. He was carrying his 2-year-old daughter near where the bullet traveled.

"I didn't notice it was a shot. It sounded like a firecracker," Garibay said.

He then realized the deputy had opened fire once Garibay saw smoke coming from a gun.

Deputies were responding to a domestic disturbance call. Garibay and his wife had an argument last Tuesday around midnight. He had a few drinks that night. When deputies arrived, Garibay stepped out with his young daughter.

"We had a conversation with my roommate before. He told me, 'You smell like alcohol.' So as I opened the door and he was talking to me, I was talking to him. And then I said, 'I have a gum.' Then I walked out and then that's when he fired his shot and he said, 'I thought you said you had a gun.'"

Investigators later arrived and were on the scene for hours. Forensics teams were also called out.

The aftermath for Garibay and his wife has been traumatizing.

We reached out the the Riverside County Sheriff's Department. They released a statement saying in part:

"The deputies immediately notified their supervisor of the unintentional discharge. A supervisor responded and spoke with occupants of the home and confirmed no one was injured. Once the investigation is completed, Sheriff's Administration will decide if the deputy violated department policies and procedures."