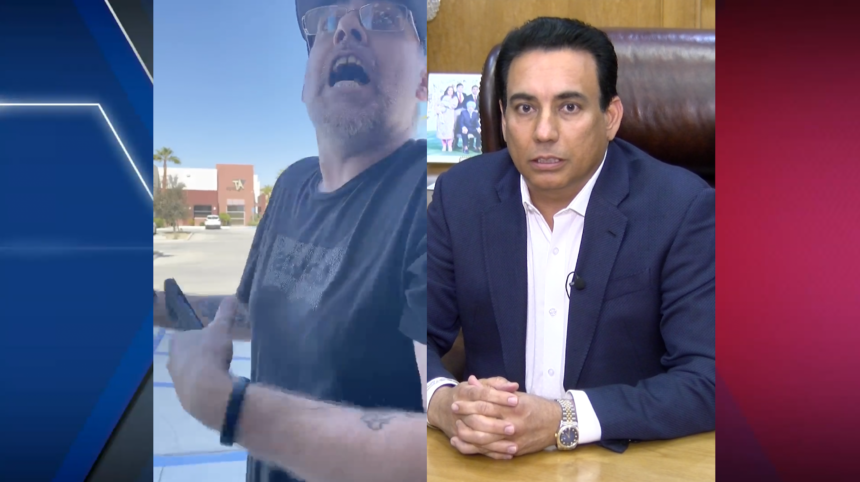 A valley businessman is speaking out after he says protesters aggressively targeted his office in retaliation to his attending President Trump's fundraiser in Rancho Mirage Wednesday.

A tense altercation ensued outside the Chandi Group Headquarters in Indio when two anti-Trump protesters arrived at the door.

"Oh, we harrassed you," one of the two men is heard asking in video shot by a Chandi Group employee, obtained exclusively by News Channel 3. "We're outside the building!"

"You're not allowing me to close the premises," the employee replied in the video.

"They were verbally abusive and rude and hostile, kept insisting that they asking for information, that we needed to give it to them," said Toni Merrihew, senior vice president and CFO of Chandi Group USA. She said the protesters forced entry past the lobby's security door.

"I was worried that they might have guns and there could be some type of a takeover," Merrihew said.

She said they were able to gain access when an employee walked out, heading straight for receptionist Ithsel Bautista.

"I felt really threatened, especially because I'm the first person when they come in that they would see, so I didn't know what to expect," Bautista said.

She said they were asking for a list of affiliated businesses they could boycott.

"He's a Trump supporter, and nobody out here will support his businesses," one man said in the video of the altercation.

"I have the right to support whoever I want," said Nachhattar Chandi, president of Chandi Group USA.

"Everyone has a right to their protest safely, peacefully; I have no objection with that," Chandi said. "But not forcefully. And we will not allow it in my company for that to happen."

"If you exercise that right in such a way that is contrary to someone else's rights: if you go onto private property, if you act in a belligerent manner, if you engage in this sort of lone wolf behavior, there's a consequence for it," O'Neill said.

"I ask people to respect everybody's opinion and I'll do the same thing too," Chandi said.

Indio Police responded during the altercation, and Chandi said he plans to press charges for trespassing. Police said no charges were filed Thursday night.