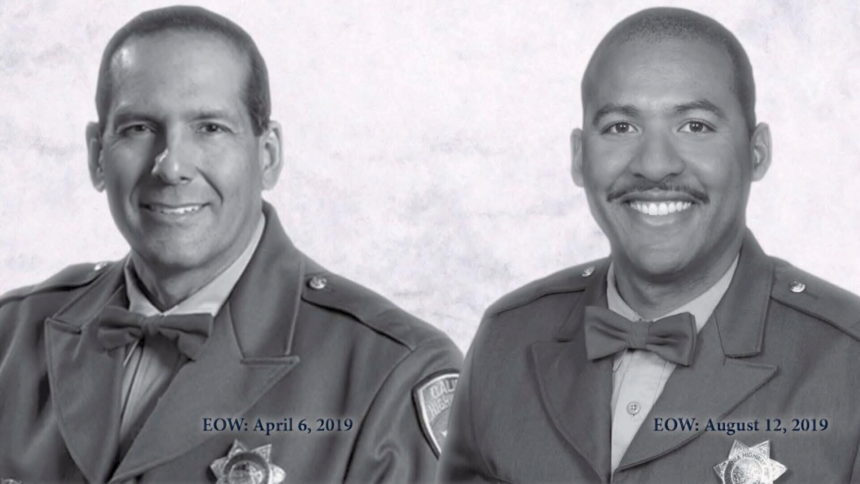 The ceremony is part of the national Blue Light ceremonies held across the country during the holiday season.

California Highway Patrol officer Mathew Napier was among those in attendance to pay his respects. Napier lost two of his colleagues in the line of duty this year: Sgt. Steven Licon, the most senior motor officer with the Riverside squad, and Officer André Moye, the most junior.

The two are the only law enforcement killed locally since 2016.

"It shook us all to the core," Napier said.

Licon was struck by a suspected drunk and reckless driver while conducting a traffic stop on a highway in Lake Elsinore in April. He had a 28-year career with the California Highway Patrol and was 53 years old.

Napier said Licon was known for his love of family.

"His desk was plastered with pictures of his family," he said. "He had a special needs son that he was very proud of. He worked very hard to give him a good life."

At a memorial service earlier this year, Licon's wife and daughter spoke about their loss.

"I miss you so very much you will always be in my heart," said Ann Licon, wife of Sgt. Licon.

"Never did I imagine that my dad would not be here to see me graduate or walk me down the aisle," said Marissa, Licon's daughter.

In August, Moye was shot and killed while conducting a traffic stop in Riverside. Moye was completing paperwork when the driver took out a rifle and opened fire. Two other officers were also wounded in the shooting.

Moye is remembered fondly by colleagues as charismatic and trusted. Napier used to share the graveyard shift with him.

He says he's struggled with the loss of his brothers.

"We have to not only continue with our day-to-day activities but also find time to grieve emotionally, find time with our families, and we still have to be able to go out there and serve the public and do our job. It's really tough," Napier said.

Agencies across the valley stopped to salute the two officers and dozens of others who have lost their lives. A seat was left empty for them at the table.

A second Blue Light Ceremony is set for next Monday at 6 p.m. at the Riverside County Administrative Center (CAC) Board Chambers at 4080 Lemon Street in Riverside.