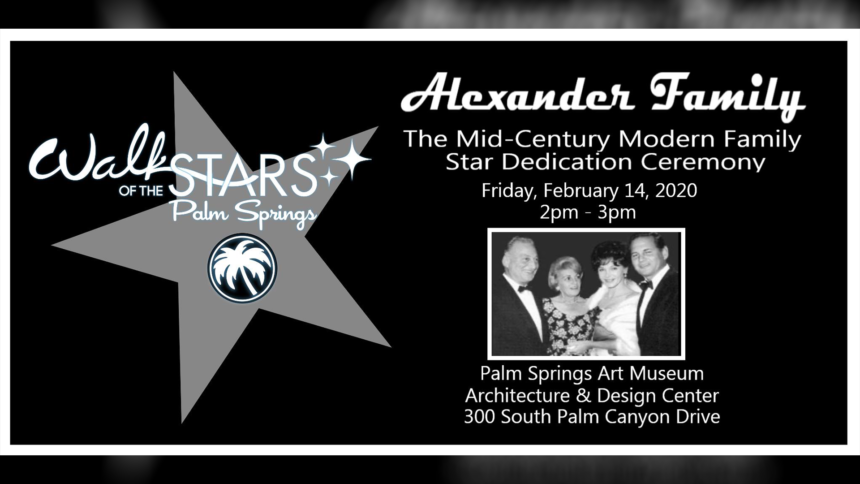 The Alexander family -- George and Mildred, their son Robert and his wife Helene -- will receive a star on the sidewalk outside the Palm Springs Art Museum's Architecture and Design Center, the 439th star since the initial five were unveiled on Feb. 26, 1992.

"I am overjoyed to be celebrating my family and the beautiful and thoughtful contributions they made to this wonderful city,'' said Jill Kitnick, the daughter of Robert and Helene Alexander."I love that my maiden name has become a noun: I live in an Alexander' --I remodeled an Alexander' -- `I flipped an Alexander.'''

Kitnick will accept the star on her family's behalf at the ceremony set for 2 p.m. at 300 S. Palm Canyon Drive. Palm Springs Mayor Geoff Kors and Palm Springs Chamber of Commerce CEO Nona Watson will emcee.

More than 2,500 ``Alexanders'' were built in Palm Springs by the Alexander Construction Company. The firm embraced a modern style of homebuilding that included simple designs and an open floor plan that were affordable for middle-class families.

All four Alexanders died when their chartered plane crashed into an Indio mountainside in 1965.

In the decade they were the active, the family built several iconic homes and hotels, including the Octotillo Lodge in South Palm Springs in 1956. The first Alexander development was the Twin Palms Estates in 1957, followed by Racquet Club Road Estates, plus more than 300 homes in the Vista Las Palmas neighborhood that quickly became favored by Hollywood movie stars.

Thousands of tourists flock annually to the House of Tomorrow in the Vista Las Palmas neighborhood, built by Robert Alexander for his family in 1960. The home, which was designed by the modernist architect William Krisel, became famous after Elvis and Priscilla Presley honeymooned there following their wedding in 1968. The residence was dubbed the Elvis Honeymoon Hideaway.

A collection of modern-style homes was not all the Alexanders left behind. They were also local philanthropists who donated money to local organizations like the Boys Club, now known as the Boys & Girls Club of Palm Springs, whose vice president, Rick Werlin, is scheduled to speak at the star dedication.