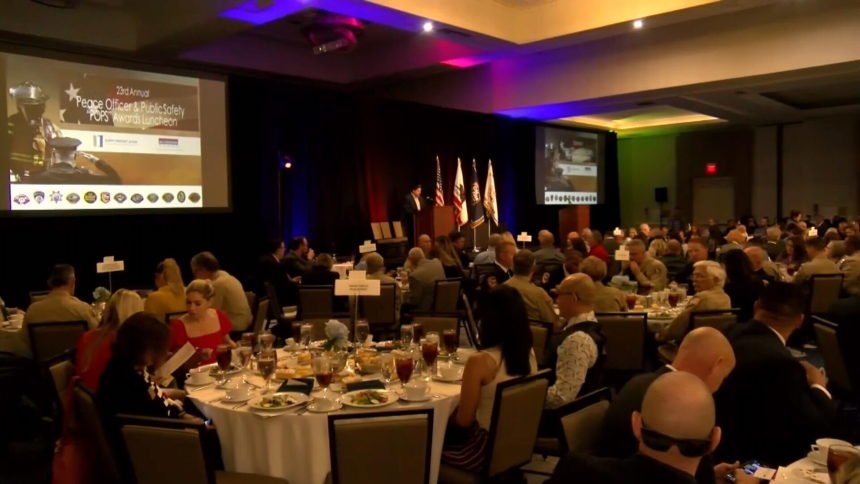 “We’re very happy and proud of them. Happy for what they do for us, for the community," Riverside County Sheriff Chad Bianco said.

The Department's dispatcher and deputy of the year were among many others awarded today.

The ceremony is put on by the Palm Desert Area Chamber of Commerce. The organization aims to recognize both men and women dedicated not only to keeping their community safe, but by going above and beyond.

Anthony Vierra received his award today for firefighter of the year in Indian Wells. He was recognized for responding to a call when a bicyclist collided with a pick-up truck.

"He actually rode into the back of a pick-up truck where there was a wheelbarrow handle sticking out, that actually impaled him," Vierra said.

Vierra helped treat the victim before he was rushed to a trauma center. The victim survived.

Another recipient is Cathedral City Police Officer Jessica Lamb. She performed a routine traffic stop earlier this year after a vehicle rolled through a stop sign.

“There were two people inside. The driver initially got out and stayed. The passenger took off," Lamb said.

The two turned out to be parolees. Police later recovered drugs, handguns, and a large amount of cash.

“I feel so honored to be one of the ones honored that is lucky enough to be awarded, but my partners and I— this is every day for us," Lamb said.

Many are now calling these recipients heroes, for being dedicated to the job.

“I think that what we are is we just wanted a job where we can help other people," Lamb said.

“To us, it’s really a passion. For most of us, there’s nothing we’d rather do," Bianco said.

"A lot of folks in the public call us heroes but really, it’s the family of our folks that make the difference and give us the ability to do what we do," Chief Newman said.