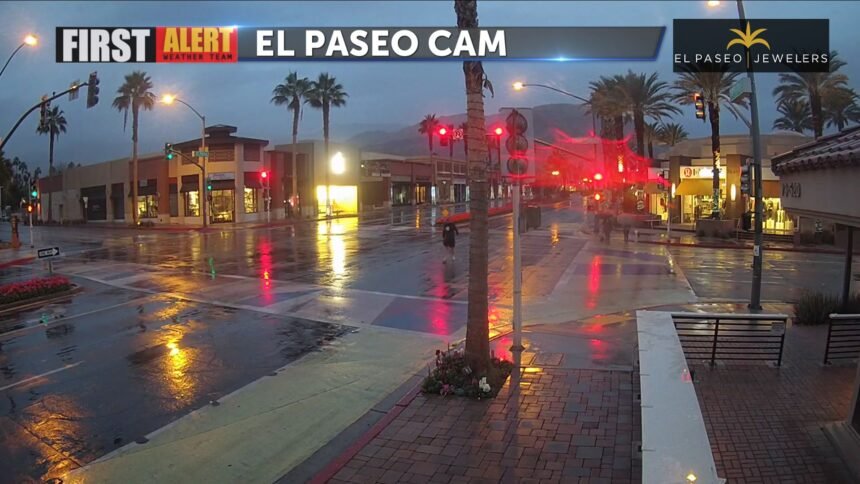 After a long stretch of dry conditions in the Coachella Valley rain touched down overnight.

A Flash Flood Watch remains in effect until midnight. That watch covers the entire Coachella Valley, and much of San Diego and Imperial counties as well.

On Wednesday a High Wind Warning was in effect until 10 PM. Gusts have been light in the Valley, but areas to the West have experienced significant and damaging winds.

"I got to get my camera out really quick and take some pictures before it evaporates," said Palm Desert resident, Mark Wasserkrug.

Downpours occurred in the early morning hours. It was a rare, but welcome sight for many people following several dry months in the desert.

"It’s really great to see some rain out here in California, we really need it. Well actually out in the desert," said Wasserkrug.

Rain clouds blanketed the Coachella Valley for much of Wednesday.

Several people lines up outside at the Indio Fairgrounds to get vaccinated.

Machado said even if conditions shifted, the clinic would be available to administer vaccines rain or shine, to accommodate roughly 700 appointments made on Wednesday.

"Do or die I was going to stand in line. That was not going to be my issue, I have a hood and I would do it with an umbrella. It was that important to get the vaccine and I haven’t seen my grandkids in almost a year," said Thousand Palms resident, Gretchen Frost.

The valley floor wasn't the only place that saw some action. Snow also blanketed the forest at the top of the Palm Springs Aerial Tramway.