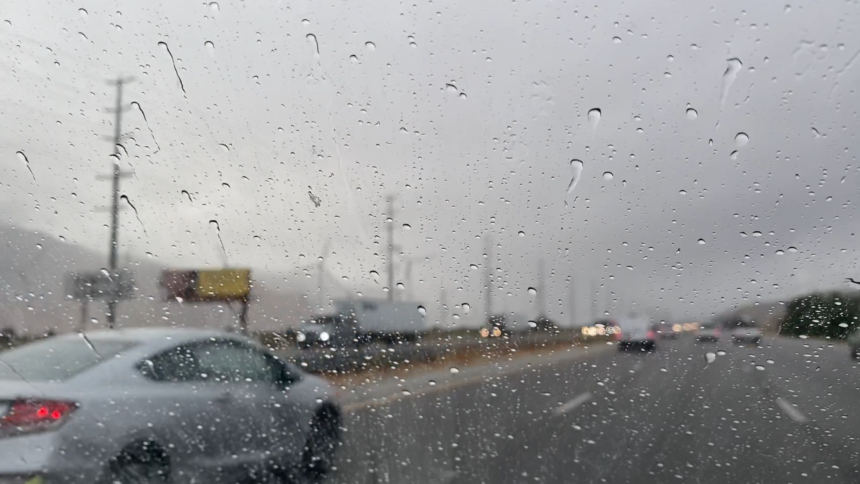 It's day two of stormy weather in the valley and for many, the rain and temperature drop are a welcome change.

But the pleasant sights, sounds and smell of rainfall aren't without significant impact.

"I enjoy the rain," said Edgar Ramirez, who lives in North Palm Springs. "I'm a big sucker when it comes to clouds in the sky, so I like it."

"Definitely doesn't happen as often here," Waters said. "I just moved to the desert so I hadn't gotten to experience it yet."

She said the rain creates a different story on the streets.

"It seems like nobody knows how to drives here now that it's raining," Waters said. "The second a raindrop falls from the sky, everyone starts panicking and going 10 miles an hour."

Some drivers said they were unprepared when it comes to windshield wipers.

"Mine are terrible — they're completely gone," Ramirez said. "Nobody really cares about the wipers because it doesn't rain as much, but honestly ... just by having out here, the heat eats it up."

Up the mountain, heavy rains closed Highway 243 to Idyllwild Wednesday afternoon. Part of the road washed out as water flowed beneath it — just three weeks after 243 reopened following a nearly-9-month closure following major flood damage on Valentine's Day.

Caltrans crews worked for hours and the road reopened by nightfall.

Atop the Palm Springs Aerial Tramway, the first snow of the season fell Wednesday.

"It's amazing — it's almost like an avalanche out here," said Will Hodgson. "I can't even feel my toes."

Snowballs flew as guests more than 8-thousand feet up enjoyed a window into a winter wonderland.

"It feels like the holidays finally," Victoria Starr said.