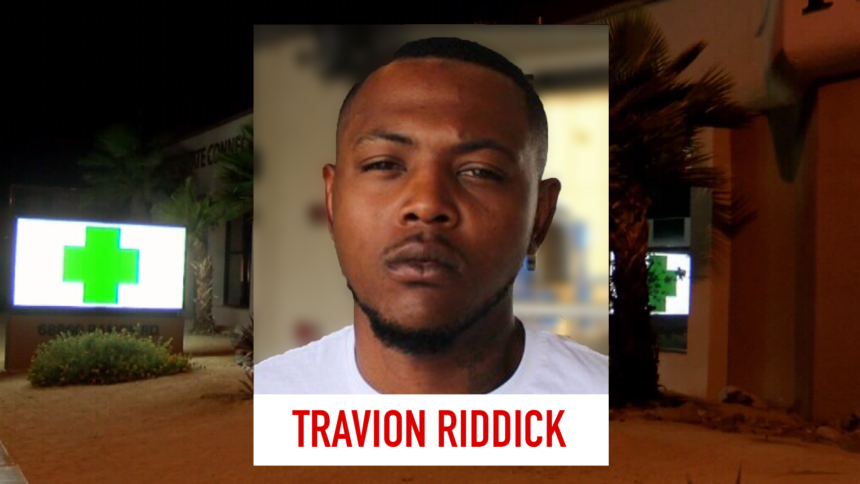 A 26-year-old convicted felon and current state prison inmate was sentenced to five years in prison today for his part in a robbery of a Cathedral City medical marijuana dispensary in 2017.

Travion Riddick, formally of San Bernardino, was also sentenced by Riverside County Superior Court Judge Dean Benjamini to an additional yearfor possessing or manufacturing a weapon while in prison, which was describedas a razorblade attached to a toothbrush, a prosecutor said.

Riddick received three five-year sentences for three counts of robbery in an April 26, 2017 heist at No Wait Meds, which will run concurrently. The weapons charge, however, will run consecutively, for a total of six years.

He was initially charged with firearm allegations as well, which were later dropped because the gun was never found by authorities and Riddick claimed it was fake.

During the sentencing hearing at the Larson Justice Center in Indio today, Deputy District Attorney Jeff Mendoza voiced displeasure with the court's sentence, insisting the robbery was planned and sophisticated.

``One co-conspirator was used to essentially gain access in a legitimate way, and then Mr. Riddick came in with a mask and a gun and heldtwo victim's at gunpoint,'' Mendoza told the court prior the sentence being handed down. ''One victim cut his hand struggling with him over the gun.''

While Riddick held the two individuals at gunpoint, the other co-conspirator, who was never captured, took possession of the stolen items,which included marijuana products and cash, Mendoza said.

The prosecutor also argued that the even if the gun was fake, the victims thought it was real during the robbery.

The victims believed it was a real gun,'' he said.That doesn't change the suffering they entailed.''

Benjamini said the three robbery charges were committed during ``one continuous course of conduct,'' and that concurrent terms were appropriate given the facts of the case.

Riddick originally pleaded not guilty in March 2018, but reversed his plea in November.

He and the unidentified man entered the dispensary about 7 p.m. that day, demanded money and made off with an undisclosed amount of cash and ``marijuana products,'' Cathedral City police Cmdr. Julio Luna said previously.

No one was injured during the robbery.

Following the robbery, the suspects fled in a gray older-model four-door vehicle that was found at Riddick's home when he was arrested the following day, according to Luna. He said evidence from the armed robbery was found inside the vehicle.

Riddick was released on $30,000 bail at the time, but was taken into custody in San Bernardino County for a probation violation before he could be arraigned on the robbery case.

He was sentenced in July 2017 to three years in state prison for violating his probation, stemming from an assault conviction, according to San Bernardino County Superior Court records.