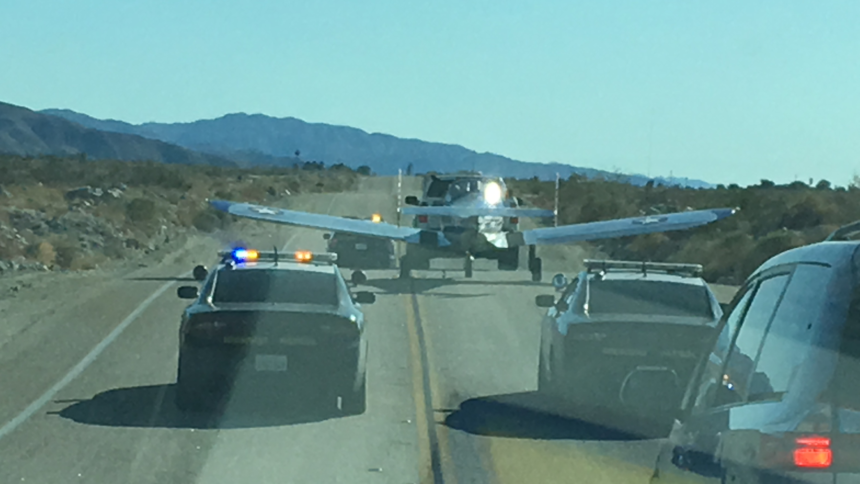 Moments after touching down on Dillon Road near Thousands Palms Canyon Road, the plane was being towed by a pickup truck with a C.H.P. escort.

"Obviously this isn't something we see everyday. We were able to go ahead and get it safely into a parking lot," said C.H.P. Officer Ramon Perez.

Eventually, the single-engine 1949 Erco Ercoupe was pulled into the parking lot at the Indio Hills Community Center.

The pilot climbed out of the cockpit.

The man driving the pickup truck, Manuel Soto of Indian Hills, spotted the plane on the road after it came down and offered to tow the aircraft to the safer location.

"I was just coming back from work and I saw the plane going really slow on the side of the road," said Soto.

After the plane was tied down, the pilot, who would not talk on camera, was on the phone with a representative with the National Transportation Safety Board.

Officer Perez says the pilot told him he decided to land after the plane lost oil pressure.

"We determined it was more of a precautionary landing. It sounds like the pilot was having some sort of mechanical issue," said Officer Perez.

The model which was first produced in 1937, was considered at the time to be the safest fixed-wing aircraft that aerospace engineering could manufacture.

The pilot was the only person on board.

The plane did not appear to sustain any damage.

"I've never seen it before. It was really surprising. I didn't expect it," said Soto.

"Well, we prefer he would have landed at the airport," said Officer Perez.

There is no word yet on where the plane will go from where it was left parked at the Indio Hills Community Center.

The Federal Aviation Administration did not release the pilot's name, but said he was flying from Jacqueline Cochran Regional Airport in Thermal to Cable Airport in Upland.