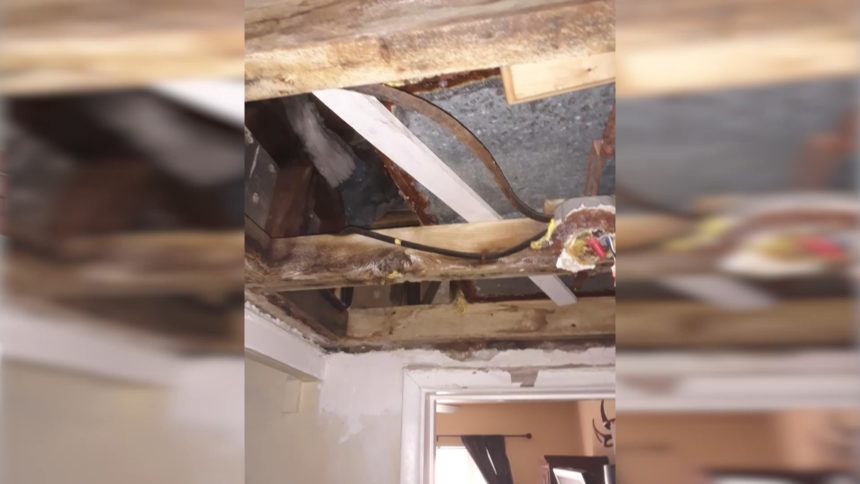 Tenants are now speaking out after facing several issues with their Palm Springs apartments.

Some of them tell KESQ they are without proper heating units in their apartments off South Camino Real near East Sunny Dunes Road.

"There’s 2 holes in my wall so the air blows through," tenant Jeremy Smythe said.

The holes are perfectly carved out where heaters once stood just days ago.

“Freezing. I have my attire, I literally wear a sweatshirt, a pair of sleep pants and sweat pants over it. That’s what you have to do. And three blankets," Smythe said.

The heaters were taken out after Smythe said his landlord did not pay for installation. He says both agreed to have them put in, and that he would front the bill. He says she would then pay him back using her credit card. When he tried charging it to his business account, it was declined.

"She got upset with me and she’s all, 'I never asked you to do it.' I said, 'Julie, 10 people heard you and I have text messages about the card being declined,'" Smythe said.

Julie Hewett, a real estate agent, is also the landlord of the apartment complex. She did not want to go on camera, but she says she plans on getting the issue resolved by Thursday in all 3 units she owns.

Hewett says she does not expect it all to be done in time because of the holidays.

Another tenant who lives at the complex is a veteran who is suffering from 2 different types of cancers.

“He is terrified of her," Smythe said. “He has mold issues. He has the same holes on which you can see in the exterior even if he doesn't allow you inside. He has the same things and then some."

The veteran did not want to go on camera, but says he pays rent on a month-to-month basis. If anything were to happen, he doesn't know what he would do, especially due to his current health state.

Meanwhile, the landlord says Smythe has harassed her on multiple occasions. She says she's working to resolve the issues. She has since blocked his text messages and only accepts written request forms for repairs.

"I have attempted on multiple occasions to discuss with the landlord to request that the basic living essentials for a habitable residence be repaired. Under every situation, she has failed to remedy the problems, while knowing her tenants have no heat, holes, in their walls, flooding, all during the cold holiday season no less. We will continue to work with the city and county to ensure these tenants have habitable conditions."

If the violations are not fixed within the proper time frame, the landlord will be cited.