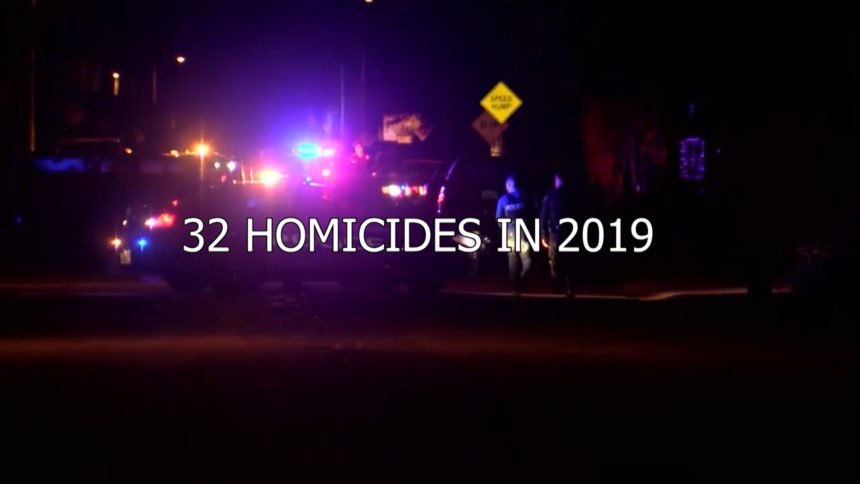 2019 was a year marked by a surge in violent deaths around the desert.

32 people were killed this year, up double from last year's total and a decade high. The previous high was back in 2014 with 31.

There were six homicides this year in Palm Springs, One in Indio, Seven in Cathedral City, Five in Desert Hot Springs, 13 in areas patrolled by Riverside County Sheriffs including four in Palm desert, four in La Quinta, and one in Rancho Mirage.

In Palm Springs, one death from a shooting outside Zelda's nightclub on January 20 ultimately led to the long-time nightclub's permanent closure. City leaders upset over the club's inability to maintain a system of working security video cameras. The Zelda's sign remains but the business is sealed up. A wrongful death lawsuit filed against the city says officials and police acted "carelessly, recklessly and unlawfully" by allowing the club to violate its conditional use permit for too long, creating a dangerous situation.

Another shocking crime, in Palm Springs three people shot and killed in a car on February 3. A fourth found dead on the street nearby. The suspect, later identified as Jose Larin Garcia, 19, of Cathedral City remains in custody without bail.

"That's one thing we've noticed is, when it comes to violent crimes, robberies when we have in custody. A lot of people we have in this level of crimes are not residents of Palm Springs," said Palm Springs Police Chief Bryan Reyes.

In Desert Hot Springs, November marked a rash of shootings and deaths. Three people killed, two in separate shootings and a body found in a field. Only one suspect arrested.

Henson says his department is looking into the shooting's gang aspects, and the public's help is always needed.

"There's other technology. There's "Ring," a lot of people have surveillance cameras. All those things come into play, so if you think you have something, it's getting it to the police department. It's the most important thing," Henson said.

In Cathedral City, there have been seven deaths, but only one arrest. Five of the homicides remain unsolved. The suspect in another killed himself. There was one officer-involved shooting. The rest all involved men shot in the street.

"When this happens to a family member it is just devastating," said Cathedral City Police Commander Paul Herrera.

Herrera says they take each and every case seriously. Some have elements that appear to be gang-related. He also says the general public is safe because overall crime is down.

In Rancho Mirage, the Riverside County Sheriffs Department considers the missing persons case of Rebecca Modrall a homicide. She vanished in February. Her body never located.

In Palm Desert, there have been four deaths including two grandparents murdered on Sept. 11. Their grandson, Frank Castro Jr., stands accused of their murder.

La Quinta has also had four deaths including a murder-suicide. The most recent homicide happened on November 21 in the Esplanade gated community. That's where 87-year-old Ronald Clarke was found dead in a trash can outside a senior care home. A caretaker is now in custody for the crime.

Indio has only had one homicide this year, however, no one has been arrested for the crime.

Indio Police Chief Mike Washburn says his department enjoys a great amount of trust with the community, but solving almost any crime requires people to get involved.

If they're so fearful they can't, they don't want us to know who they are, they can do that through Crime Stoppers. That's why that organization exists nationwide," Washburn said.

Washburn says the key is to do something to help. Otherwise, their job is far more difficult.

You can reach Valley Crime Stoppers at 760-341-STOP. Tips can remain anonymous and you may be eligible for a cash reward.