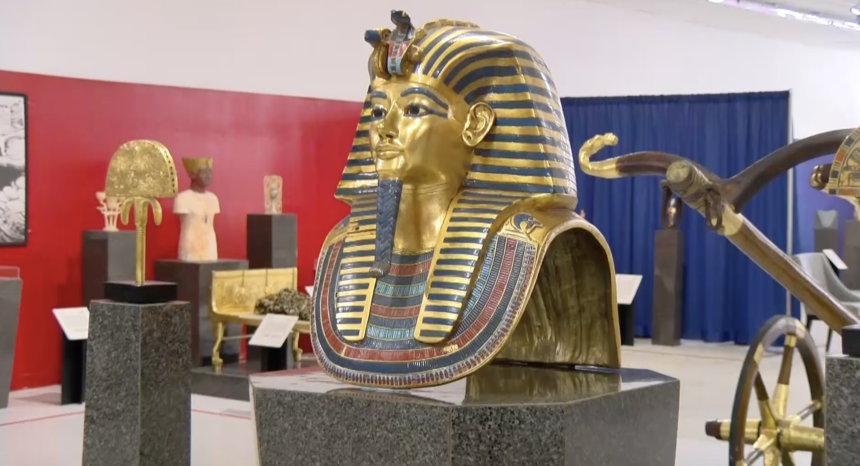 A new museum has just made the desert its new home. It’s called "The Museum of Ancient Wonders.” Eye on the Desert’s Caitlin Thropay gives us an exclusive look at some of the many ancient wonders inside.

Take a step back in time at The Museum of Ancient Wonders in Cathedral City. Located at: 69028-b East Palm Canyon Drive.

Executive director and chief curator, Alberto Acosta shows us some of the over 250 artifact and fossil displays.

“We are standing in front of the twin spirits of the Pharaoh," Acosta said. "They were there to guard the tomb from any intruder,” he added.

The next piece he showed us was a beautiful golden shrine.

“Each goddess that surrounds this building was responsible for one of the inner organs of Pharaoh. It literally contained his stomach, his liver, his lungs inside this golden building,” he said.

And right next to it, is a replica of King Tut's golden throne.

“He liked to place his feet on the images of his enemies,” Acosta said.

Even his sandals had images of his enemies on them.

Acosta tells us it took 10 years to gather these pieces.

“These are reproduction companies in Egypt that have been making reproductions of the ancient treasures of the pharaohs for generations,” he said.

And now to the museum’s Mesozoic hall.

“Here we have the magnificent skull of a Tyrannosaurus Rex,” he said.

“Along the bottom portion of the jawline there are indentations that show us that dinosaurs had lips,” he explained.

So why did Acosta bring these replicas of ancient wonders to the desert?

“I really felt at home here and I knew that the collections would create museum diversity for the valley,” he shared.

“In the valley, we have a lot of attention to contemporary art and modernism and I thought that bringing these collections about the story of ancient civilization and prehistoric life would give context to the way that we live our lives today,” he added.

Acosta says he hopes to expand his collection and eventually add real artifacts as well.

“I hope the community embraces this effort. I think it has a very strong future here in the valley and I think with the community embracing it, coming to visit it and making use of it that it will grow in stature and scope and ultimately into its own building," he said.

You can find more information on the Museum of Ancient Wonders at www.moaw.org