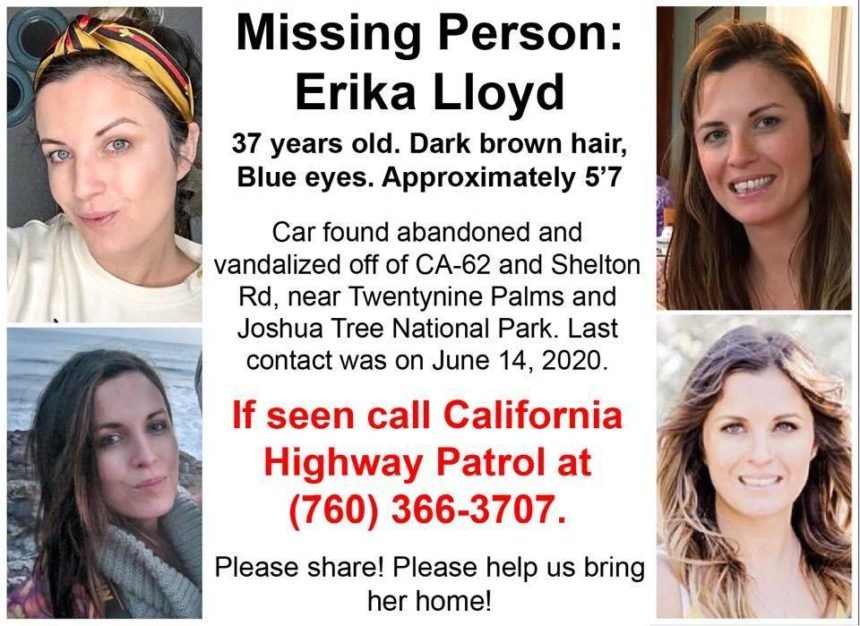 The search is on for a missing Walnut Creek woman, Erika Ashley Lloyd last seen leaving the the Walnut Creek area last week for a road trip to Joshua Tree National Park.

“We are just asking if anybody has seen her car or her or seen her since to let the authorities know," said Lloyd. "Her son, Chase is waiting for her and that he loves her very much.”

The sheriff’s department believes Lloyd was traveling to Joshua Tree National Park to camp but its still unclear if she came by herself or with a group.

“When the vehicle was noticed inside of the campgrounds there was no camping equipment directly associated with or in the vicinity of it," said Nathan Lewis, Park Ranger for Joshua Tree National Park. "So we can’t confirm or deny that the individual camped or stayed in the park.”

Posters with Lloyd’s face are posted through out the campgrounds in the hopes someone has seen her.

Joshua Tree’s search and rescue members teamed up and set out on an early search to retrace her steps to help find clues to Lloyd’s disappearance.

"We can look for clues like broken glass, any jewelry that you might find out there," said Lewis.

According to park rangers, who were patrolling the Jumbo Rock’s campground on Tuesday, spotted a vandalized black Honda Accord parked near number 47 and 48 campsite.

But the ranger said the security footage shows the vehicle leaving the park Tuesday night.

After about four hours of searching, crews members gathered back up to share information on what they saw.

“ We can't definitively say at this time," said Lewis.

"I thank everybody that has been helping us while we have been out here," said Lloyd.

If you, or anyone you know, has information regarding this case, is asked to contact the San Bernardino County Sheriff’s
Department, Morongo Basin Station at the (760) 366-4175.