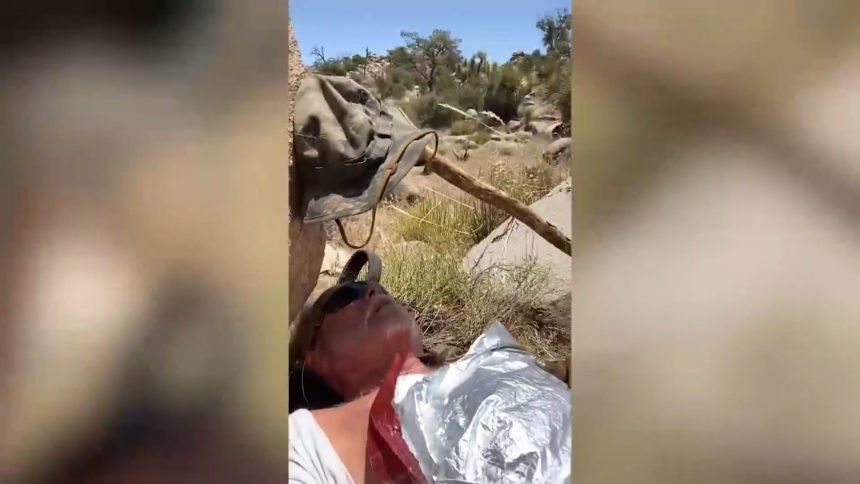 A valley resident shared his near-death experience with News Channel 3 after spending 40 hours stuck in Joshua Tree National Park before being rescued.

La Quinta resident, Robert Ringo yelled in a video he took of himself last Thursday. He was calling for help after falling and breaking his leg while walking around Quail Mountain in Joshua Tree National Park.

"I started trying to at least turnover and when I did, it was just unbelievable pain," he said.

L little did he know at the time he had broken his femur, left stranded and hurt.   He did bring two liters of water with him, but with the desert heat…  "This is the first time in my life I've experienced no saliva," he said in one of his videos.

With no way to signal help, he began recording himself, not knowing if he would make it out alive.

"Of course there was zero service but I had tagged my location and shared it with my son Ryan before I left. That's just something I always do," he shared.

His family started looking for him on Friday and with no luck, Ringo spent a total of 40 hours in the wilderness.

It was on that plateau at 9 o'clock on Saturday morning when he finally heard a search and rescue helicopter above.

"I never got to the point where I thought, I'm not going to make it. I just had a confidence and a faith," he said.

The Joshua Tree Search and Rescue team rescued him and brought him to Desert Regional Medical Center.

Ringo said he can't thank his rescuers, who he calls angels, enough for finding him.

"I'm grateful because if I had never been found it would've been devastating for my family," he said.

Ringo had surgery on his leg and is expected to recover. He said he is looking forward to hiking again.