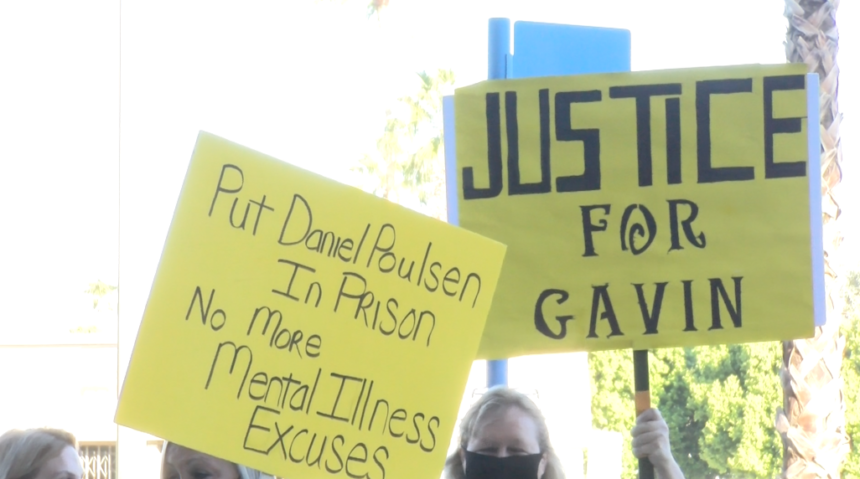 The man accused of attacking a 7-year-old boy in Desert Hot Springs was due back in court on Thursday. Daniel Poulsen, 32, was scheduled to appear at a hearing set for 8:30 a.m., which was then pushed back to 1:30 p.m.

"Knowing what he did, and the steps he took to do what he did, he knew what he was doing," said Wendy Ludwick, mother of 7-year-old Gavin Ludwick.

Ludwick, her son, and several other supporters rallied in front of the Larson Justice Center in Indio on Thursday, as they chanted "Justice for Gavin."

"He needs justice, he didn’t deserve this," said Ludwick.

One sign read, "Lock him up. Save our children."

Poulsen was arrested on the morning of July 19 after an extensive investigation led Desert Hot Springs police to his whereabouts. He is accused of attacking Gavin the night before on the 9600 block of Vista Del Valle. According to Ludwick, her son had been walking home from a pool party from a neighbor's house.

A neighbor who lives across the street, Alturo Delgado, told News Channel 3 he was leaving his home with his girlfriend to get some food. As he turned the car around, he discovered the unconscious boy lying facedown on Vista Del Valle just after 7:00 p.m.

Gavin was first taken to Desert Regional Medical Center before he was airlifted to Loma Linda University Children's Hospital. He suffered major injuries to his head. Doctors had to replace part of his skull with a metal plate.

In July the criminal proceedings were suspended, and the judge appointed a doctor to evaluate Poulsen and determine whether he is competent.

"Frustrating, it’s frustrating that he’s gotten away with so much already and that he was out and had the ability to do what he did to Gavin," said Ludwick.

Two behavioral health specialists were appointed by the court to evaluate the defendant's mental competency. As of Thursday criminal proceedings remained on hold as the Riverside County District Attorney separately requested a trial where a jury could decide whether 32-year-old Daniel Poulsen is mentally competent. The evaluation findings from the medical experts were not revealed during the hearing.

Poulsen has a lengthy rap sheet that includes robbery and indecent exposure.

"We need to stop letting him out, he has done multiple crimes like this and has done a year or so in a mental facility and they just let him back out on the streets. That is how this happened to this child," said longtime friend of the Ludwicks, Nancy Mercer.

Mercer came out to show her support for the family.

"It just makes sick to my stomach, it shouldn’t happen to anybody and we need to make it stop," said Mercer.

Coincidentally one woman, Curtresa Washington, arrived at the courthouse for a separate matter. She said she went to middle school and high school with Poulsen in Desert Hot Springs.

"It’s kind of devastating knowing it’s someone that you knew and went to school [with]. However, I don’t condone what happened and I feel like he should be prosecuted to the full extent of the law," said Washington.

Despite an extremely process, Wendy Ludwick has a message to the community.

"Don’t forget about this. Everybody needs to remember this so it doesn’t get pushed off into the back," said Ludwick. She added "there needs to be laws- if he’s not mentally competent, there needs to be some place that he can stay and not just be there for 2 years and let go again because that’s not right. Gavin is going to have to spend his whole life dealing with what was done to him."

The case is scheduled to be revisited on December 2.