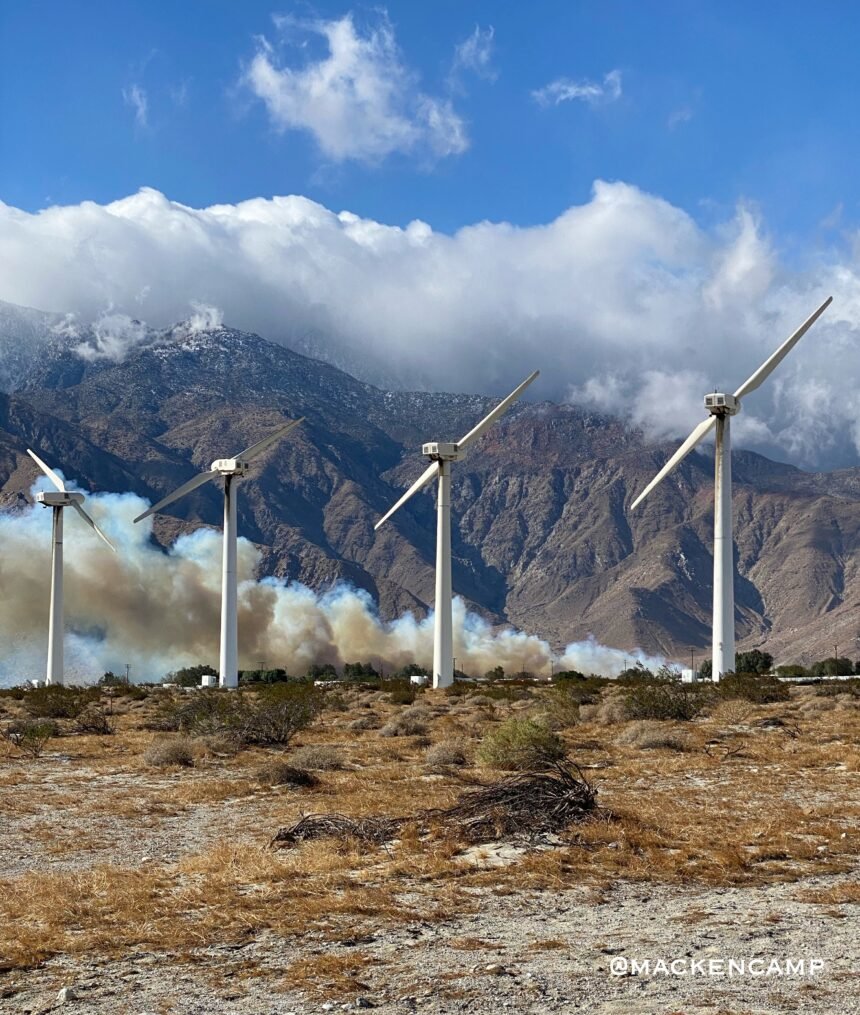 Update 11/08 9:00 p.m. - Kellogg fire has burned 26 acres and is zero percent contained. All evacuation orders have been lifted.

A fire that erupted Sunday morning in North Palm Springs has spread to a nearby salvage yard. Crews initially responded to a mulch fire at around 8:30 a.m. at Kellogg and Pipeline Roads, prompting evacuation orders for nearby homes.

"It doesn’t matter the temperature, how cool it is. We have dry fuel here that ignites very rapidly and then with the wind, it fans it and makes it more intense. None of the rain is helping us because it’s not substantial enough, it’s just sprinkling so it doesn’t really help us," said Cal Fire and Riverside County Fire Capt. Fernando Herrera.

At certain times during the firefight, light scattered showers came down. The wind, however, was the main source to drive the fire. Gusty winds sent plumes of smoke through the desert.

"It’s already well established inside the junk yard just to the East here so there are some vehicles and other debris that is burning. It extended further South into some vegetation area and also posed a threat to the wind mills and substations to the South," said Capt. Herrera.

Aside from the green waste that was ignited, other items such as tires and construction waste, have been dumped in the area. Herrera said that could also fuel the fire.

A dozer was also on site turning over the mulch to set up a perimeter, and keep the fire from spreading northward. Later in the afternoon, the winds shifted and challenged the divide.

"The wind is kind of worrisome, if they’ll be able to put it out. I don’t expect it to go to Palm Springs or anything like that, but there’s definitely high wind today so I’m worried about that," said Palm Springs resident, Peter Theodropoulos.

Theodropoulos came to the site of the fire to get a closer look.

Several homes in the area are being threatened. Shortly after the fire started, officials issued an evacuation order for residents north of El Dorado Road to Garnet Road. On Sunday night that evacuation remained in place.

"The evacuation was placed for their own safety. If they had a wind shift most of those homes would be exposed to smoke, particularly hot embers landing into the property," said Herrera.

As of Riverside County Emergency Management Department did not have a location set up for evacuees to go, according to Capt. Herrera. Many residents opted to stay home and wait it out.