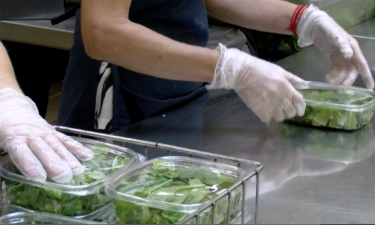 Short-term vacation rentals have been a growing cause of contention throughout the Coachella Valley, and the city of La Quinta is no exception.

They give tourists a place to stay, create income for owners, and create related service jobs. Cities also enjoy their tax revenues.

"It can't just be a money grab," said a resident Christopher Mikulenka at a recent city council meeting. "That's what it really is right now. That's what we feel like. We're losing our neighborhood right now."

Complaints by neighbors about these properties have also been piling up. Residents on Fiesta Drive have really been impacted.

Mikulenka showed us his concerns one Saturday night. "The noise you can hear right now if you can hear it faintly is coming from seven houses down the block," said Mikulenka.

Fiesta Drive has 8 short-term vacation rentals on a street of 25 homes. The city tells KESQ News Channel 3 five are properly registered with the city, one opted out in April and two are expired.

No amplified music is allowed from any of them. That new rule was enacted this summer due to skyrocketing complaints from the city's 1,325 permitted STVR properties. The city believes there are more than 400 others which are not properly permitted.

Mikulenka says he's reported STVR violations countless weekends, mainly for noise. "Many nights we get woken up in the middle of the night," Mikulanka said. "It's difficult to go back to sleep and it's hard when you have to get up at 5:15 a.m. in the morning to go start your workday where you work at," he added.

Loud noise is the top STVR complaint citywide, only behind STVR properties operating without permits. We used an audiometer to record decibel readings of between 65 and 70 decibels as music played in the backyard of one STVR property. That's louder than La Quinta's noise ordinance allows for residential neighborhoods, what zoning law says should be considered a quiet neighborhood environment. And again, STVR properties aren't allowed to have any amplified music by the current city ordinance.

"Many of our weekends are like a fraternity row on a college campus," said another neighbor, Kathy Hartung. "Their screams, chants, and drinking games can be heard up and down the street and across the golf course," Hartung added.

Neighbors support Mikunlenka's desire to return their street to a more quiet environment. "No, no, He's not the only one," said a neighbor who shared her concerns over the numerous loud parties and groups disturbing their neighborhood. Residents are asking for help from city hall.

"It's nothing against these guests," said a city code compliance supervisor, Kevin Meredith, at a November city council study session. "When you go knock on the door at midnight they're as nice as can be. But they're on vacation and they're not thinking about the neighbors," he added.

At a Sept. 15 city council meeting, the mayor said some resident complaints are unfounded. "They hear one little laugh and feel like it's a disruptive party," Mayor Linda Evans said.

City leaders have stated their desire to strike a balance between resident concerns and allowing short-term rentals but neighboring Indian Wells, Palm Desert, Rancho Mirage, and Cathedral City have all moved to ban them in some form or entirely.

For La Quinta, the transient occupancy tax from hotels and STVR properties are big money. They are the city's third-largest general fund revenue source only behind sales and property taxes. Transient occupancy taxes account for $6,455,100 in annual revenue. Sales taxes account for $15,825,900 and property taxes provide the city's general fund with $9,617,000.

The city had logged 1,432 STVR complaints as of September and issued 71 citations totaling $51,800. It's also hired a security company to help the city's four over-worked code enforcement officers and created an ad-hoc committee to find common ground while improving its enforcement program.

Another problem is documenting violations. "A lot of times the partygoers are passed out and quiet by the time somebody comes to investigate," Mary Caldwell, an STVR Ad-hoc Committee representative told the city council eliciting laughter.

It's not a laughing matter for Mikulenka or other neighbors. The city admits it can take up to two hours for a compliance officer to arrive and investigate which makes it hard to even validate many complaints. "I'm a little emotional, but it's disgusting," Mikulenka told the council. "It's absolutely disgusting what's going. We've had to take matters into our own hands because the city hasn't done anything about it."

Nearly two-thirds of La Quinta's STVR properties are owned by people who live out of the area, far more than approximately a third of which are owned by city residents.

The stakes are high and could be even bigger in the future as investors eye the city's neighborhoods as a home to more STVR properties. A local realtor told the city council on Nov. 17, that 90 percent of the properties she's currently selling to home flippers are going to people who are planning to use the properties as short-term rentals.

The I-team has also heard from residents from the La Quinta Cove to PGA West saying city leaders are putting the interests of primarily out-of-town investors over its own residents and quiet family neighborhoods. Some are so frustrated, they say they plan to move away after decades in the city.

In emails, STVR owners and advocates question the city's numbers and take issue with what they say are outlandish claims by residents.

There's no word yet if the city plans to limit the number of such properties in its neighborhoods or allow them to spread uncontrolled. A local contractor who flips properties told the city council at the same meeting that 9 out of 10 of his flip customers are from the Los Angeles area.

Mayor Evans responded saying, "When we hear, 'My neighborhood is changing. We had such a great little neighborhood. All the kids played together-- went to school together and now they're all rentals.' Well then, why aren't you mad at the person who sold their house and left if they're such a great community?" Evans added the city is not the La Quinta from 30, 20, or even 10 years ago, but more of a transient tourist destination.

The city has imposed a moratorium on new STVR properties until early February. But that could be lifted if city leaders approve a new STVR ordinance before then.

City council meetings are set for Dec. 1 and Dec 15 to discuss possible changes to the city's STVR ordinance, and to take public input.