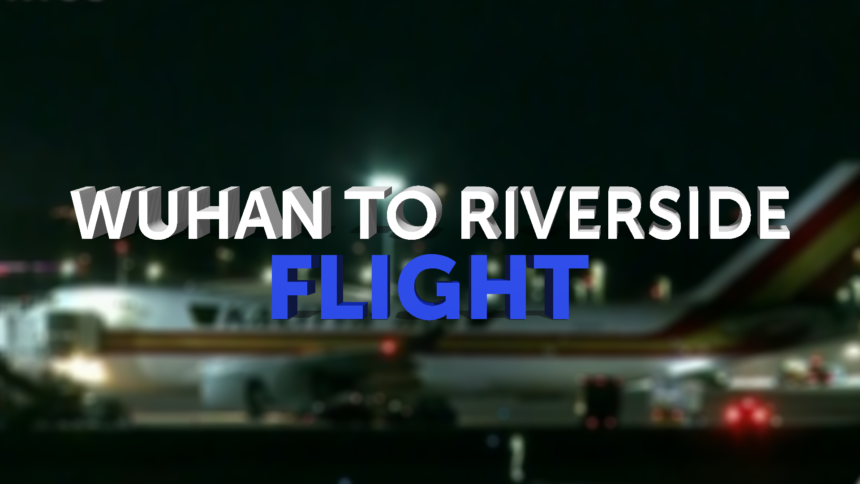 A U.S. State Department-chartered aircraft carrying up to 240 U.S. citizens from the Wuhan region of China, where the deadly coronavirus was first detected, arrived at March Air Reserve Base in Riverside this morning.

A news conference on the plane's arrival is slated for 11 AM. You can watch the full event through the live player below and on our LIVE EVENTS page.

The flight was originally scheduled to land at Ontario International Airport, but the Centers for Disease Control announced the new landing site for the aircraft Tuesday night.

``CDC just let us know the flight will be diverted to March Air (Reserve) Base,'' San Bernardino County Supervisor Curt Hagman said in a video posted to his Twitter account about 7:35 p.m. Tuesday.

Up to 240 U.S. citizens, including nine children, were reported to be on the flight, which landed in Anchorage, Alaska, for a refueling stop and preliminary screening of passengers by CDC personnel about 10:30 p.m. Tuesday.

Passengers who have a cough, fever or shortness of breath in Anchorage will be further assessed by medical experts, according to the Alaska Department of Health and Social Services.

Ontario International Airport is designated by the federal government as the official repatriation center for California.

``We are always prepared to receive our citizens abroad in times of emergencies,'' Hagman said.

Passengers on the flight ``will consist entirely of U.S. State Department employees, U.S. contractors who have been working in China and other U.S. citizens,'' according to a statement from San Bernardino County.

``No occupants who present symptoms of illness will be allowed to proceed into the continental United States. Upon arrival in the continental U.S., (passengers) will again be screened by CDC personnel and monitored for up to two weeks.''

``We are working on the logistics and finalizing plans,'' Arballo said.

Hagman said San Bernardino County and Ontario International were both prepared for the flight's arrival, ``but the State Department decided to move the flight to March Air (Reserve) Base for the logistics they have. That flight is not coming to Ontario, it is going to (Riverside) at this time.''

Before the plane's arrival itinerary was changed to a March ARB, a CDC official had told CNN the passengers may be forced to stay in isolation between three days and two weeks.

At the time, Hagman said authorities were setting up beds, phone chargers and televisions in an isolated, dormant hangar at Ontario International Airport.

It was unclear whether the same procedure would be followed at the base.

The coronavirus outbreak was first detected in December in the industrial city of Wuhan in the Hubei province of central China. Since then, more than 5,975 cases have been reported in China, with at least 132 deaths, and the virus has been confirmed in patients in a handful of other nations including the U.S.