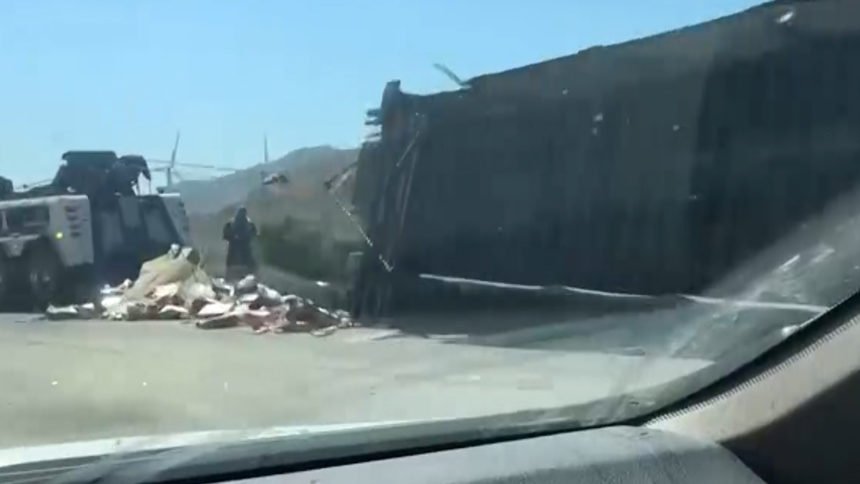 A Sig Alert was issued and Interstate 10 traffic was backed up Monday morning in Cabazon after a big rig rolled, causing the trailer to break into three pieces and spilling ramen noodles on the roadway.

A Sig Alert was issued and currently still remains in place as of 12:30 p.m.

The freeway's eastbound lanes were all blocked after the large truck overturned, the collision reported by the California Highway Patrol at 5:54 a.m.

By 11:00 a.m. the freeway's eastbound #1, 2, and 3 lanes were reopened to traffic, but the truck's wreckage was still blocking the eastbound slow lane and the road's right shoulder.

Westbound traffic was not impacted by the rollover crash.

The CHP initially reported that the eastbound #2, 3, and 4 lanes were closed from Main Street to Haugen Lehmann Way and traffic was reportedly using the center median to pass by the crash scene.

The Sig Alert was issued by the CHP at 6:16 a.m. for an unknown duration.

The truck's driver was out of the wreckage and walking around. The truck was hauling ramen noodles, according to the CHP and broke into 3 pieces in the wreck.

The semi truck was also leaking oil, according to the CHP.

This is a breaking news update. Stay with KESQ News Channel 3 for updates on-air now and here online.