We can’t say that we weren’t warned.

Experts told an eager public jazzed to fly again this summer that things would get chaotic in the skies — and that’s exactly how things turned out all summer long.

We started out with rough Memorial Day weekend. Cancellations and stranded luggage were headlines off and on all summer. Then on Monday, we learned American Airlines is trimming 31,000 flights — 16% of its schedule — for November. That’s a much steeper number than the 2% of flights American is cutting in September and October.

People looking for hopeful signs find them in short supply. Are we mired in this pattern for the rest of the summer travel season — and, heaven help us, into fall? Is any hope in sight?

Travel experts who spoke to CNN Travel this week say they expect the fall travel season to bring some relief — in prices most definitely but possibly in flight disruptions, too. But we still have the rest of August and the Labor Day weekend to go.

With so many deeply rooted, systemic problems such as staffing shortages from pilots and mechanics to air traffic controllers, no one is seeing any particular dramatic relief in the next couple of weeks.

“Looking back on the summer, you’ve had a couple of big holiday travel periods. You had Memorial Day when air travel went terribly. There were widespread delays and cancellations that turned into a nightmare for many folks traveling. … And then you had July Fourth weekend, when there was minimal travel disruption,” Keyes said.

“Looking forward to Labor Day, my best guess would be it will be closer to July Fourth than to Memorial Day. And the reason for that is, I think, there are going to be fewer overall travelers on Labor Day than on Memorial Day,” he said. “With fewer travelers, you’re going to have less strain on the system.”

That lessens the chances of a domino effect if something goes wrong.

“One reason we had a difficult summer was because the system was strained so heavily by the pilot shortage, by the airplane shortage, now shortages at air traffic control,” Keyes said.

So when bad summer weather strikes, there are not enough spare people on staff to absorb the fallout.

“But with Labor Day looking to be a smaller travel period than earlier in the summer, I’m more confident that things won’t be quite the meltdown we saw earlier this summer,” Keyes said.

Kathleen Bangs, a former airline pilot and current spokesperson for flight tracking site FlightAware, echoed concern about the issues that too many people on too few flights can cause.

“People tended to vacation earlier this year,” she said. That put breaking-point pressure early this summer on airlines dealing with issues she pointed out, such as pilot training and lack of pilots in the pipeline at regional airlines.

There’s also a shortage of maintenance technicians and mechanics. She said more than half of that critical work is outsourced overseas. “Right now, there are airlines canceling flights simply because there aren’t enough mechanics,” Bangs said.

But with so many people having already made their summer trips, some schools already going back into session and business travel not fully up to prepandemic speed, it could be easier for the airlines to absorb weather-related issues.

Bangs put some of this in perspective.

“In 2019, delays were still really bad. … I think one of the reasons delays are driving people crazy is because many days now they’re over an hour.”

But airlines might give you only 40 to 45 minutes to make a connection.

“That means you’re not going to make that connecting flight. Which in the past, the airline would say, ‘No problem. We’ll put you on the next flight.'” Bangs said. “But they can’t do that now with so few open seats. That’s why in 2019 you didn’t hear many people talking about airline delays, but you do now.”

One bright spot: Airfares have fallen

One thing that’s certain: There’s reason for people to cheer right now regarding prices at least.

“What we’ve seen since that big peak in mid- to-late May is airfares falling,” said Lead Economist Hayley Berg at Hopper, a travel booking app. But don’t dawdle during this drop.

“These low fares will be available for the next couple of weeks for travel in September and October. And then airfare will start to rise, and it will rise very fast as we head toward Thanksgiving and Christmas.”

Airfares have dropped an average of 37% in the United States from the peak in May to now, Berg said, and passengers are paying less than they did for Memorial Day and July 4th travel.

Berg shares Keyes’ cautious optimism for Labor Day weekend — especially if you haven’t booked yet and you’re flexible about when you go. Peak travel days will be Thursday, Friday and Monday. Instead, try departing on Saturday.

“You can save as much as 26% off peak airfare,” she said. And then returning on Wednesday could save you up to 21%. But it’s not just price savings you could get on those particular days.

“There will be fewer people at the airport, shorter lines and hopefully less disruption as well. So it not only saves you money, but also saves you some significant frustration,” Berg said.

“There’s a definite advantage to trying to fly on days where airports will not be as crowded and when there are fewer flights scheduled. The natural way that delays and cancellations often happen is back-up on the tarmac when one flight gets delayed, and it has a chain reaction. Or one flight is canceled and it disrupts an entire schedule. So flying on off-peak days has significant advantage.”

All of this comes with a caveat out of anyone’s control: the weather. It’s hurricane season in the United States, and weather has been extreme in other places, such as Western Europe. A major storm could change the calculus quickly, Keyes said.

Another strategy: Wait for fall

Bangs, Keyes and Berg all like the prospects for September and October travel even more, and not just for the typically lower prices.

Bangs sees a potential lull in the flight chaos after Labor Day weekend.

“The best time to travel is September and October. The crowds go way down. Kids are in school. The weather is usually better,” Bangs said. “But for the [winter] holidays, you want to get that ticket now because the prices will go back up.”

Berg is “absolutely 100 percent” behind the autumn flight.

“For travelers who would like to sneak in one more trip before the [winter] holidays, September and October are the absolute best time to fly, which means they should be planning and booking their trips this month,” Berg said.

More strategies to come out ahead

Here are some more tips on navigating the skies now and in the weeks and months ahead while we hope and wait for things to settle down:

Take the earliest flight possible: “The earlier you book your flight, the better the odds it will go smoothly because … weather tends to be better in the morning than the afternoon,” Keyes said. “But also because you don’t have the risk of domino-effect cancellations.”

“More popular destinations are typically going to have more flights and more direct flight options. Which means even if there are disruptions, the odds that you can get another direct flight or get on another flight at all is much higher.”

Nonstops: Bangs and Keyes suggested booking nonstop over connecting flights anytime that’s possible. It might be worth the extra cost if there is any.

Consider a budget carrier: Bangs said budget carriers should be considered for going point to point in the United States, but be careful about out-of-country flights. They might not have the backup resources of a Delta Air Lines.

Don’t check a bag: “If your flight does get delayed or you do need to get rescheduled or miss a connection, it’s going to be a lot easier to do if they don’t also have to find your bag in the belly of a plane,” Keyes said.

What appears at first blush to be bad news could have a silver lining.

For instance, Bangs actually sees some positivity to American Airlines’ November cancellations of 31,000 flights. Such moves could “hopefully keep delays down and cancellations minimized for everybody if the schedules are pared back a little bit realistically. That’s probably a good thing.”

She also sees long-term hope in efforts by Transportation Secretary Pete Buttigieg and the US Department of Transportation to get a handle on things: “We’re going to see improvements, but it’s going to take months. I think airlines are more responsive now if you make a complaint.”

But some “golden era” parts of flying might never come back, Bangs said.

“The days of having a half-empty airplane — those wonderful days you could stretch out and sleep across all three seats — I think those days might be gone forever.” 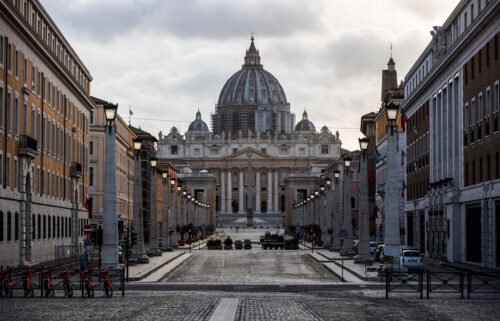