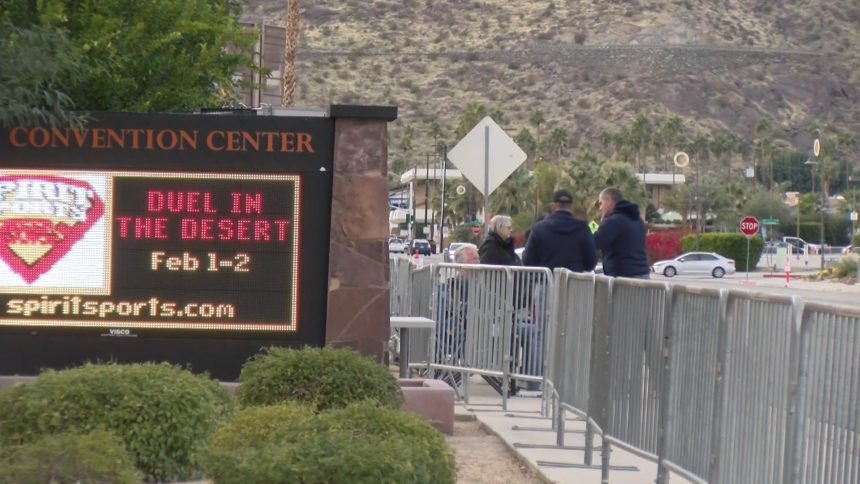 The 2020 Palm Springs International Film Festival Awards Gala is just a few hours away! This afternoon, some of Hollywood's biggest stars will be honored at the Palm Springs Convention Center.

Check out all our 2020 PSIFF Coverage here

Some spectators have been camping outside the convention center since Monday, hoping for a chance to see their favorite stars.

"Been here since 8 am on New Year's Eve," one camper said.

A row of folding chairs lines the sidewalk just outside the convention center's entrance.

"This blue chair was locked up here when we got here at 8 o'clock. Come to find out, the gentleman got here the night before and locked up his chair and would go and come back," another camper said.

The camper did add that blue chair man is a "nice guy."

Being a good sport is the name of the game for veteran PSIFF campers. Some fans said they have created friendships after doing this for years. We spoke with one resident who says this is their 11th year camping, another said it was their 6th.

After doing it so long, you might just say, these campers have perfected their craft.

"We just take turns to get something to eat. We use the casino for restrooms and bathroom breaks. One of us will go home, take a shower every day so we stay clean," said Steve Markin, a Cathedral City resident.

A must for PSIFF campers, portable heaters and zero-degree sleeping bags to brave the chilly nights.

"Last year was supposed to be our last year, after 10 years we thought we'd give it up and then they said JLO so we thought 'We got to get JLO.' I don't think it's ever going to end," Markin said.

Jennifer Lopez is among the many stars that will be honored at the event. She's receiving the Spotlight Award for her role in "Hustlers." Other stars that will be honored include Charlize Theron, Quentin Tarantino, Adam Driver, and Joaquin Phoenix. Phoenix is slated to receive the chairman's award for his role in "Joker." Campers were especially excited to see Phoenix.

Another camper also chimed in, saying, "That was great. It was a little scary, he's great, he's awesome. It was an incredible performance, creepiest Joker I think I've seen."

The dedicated fans are ready. A few of them, even hoping to add to their collection.

"I got a little wall, a little Cathedral City wall of fame," Markin said.

A wall at Markin's home of autographed star photos. One he hopes will see some new additions after Thursday.

Watch News Channel 3 tonight at 5 p.m. as Angela Chen and Patrick Evans are live on the red carpet as the stars arrive. The awards ceremony starts at 6 p.m., you can watch that live on KESQ.com