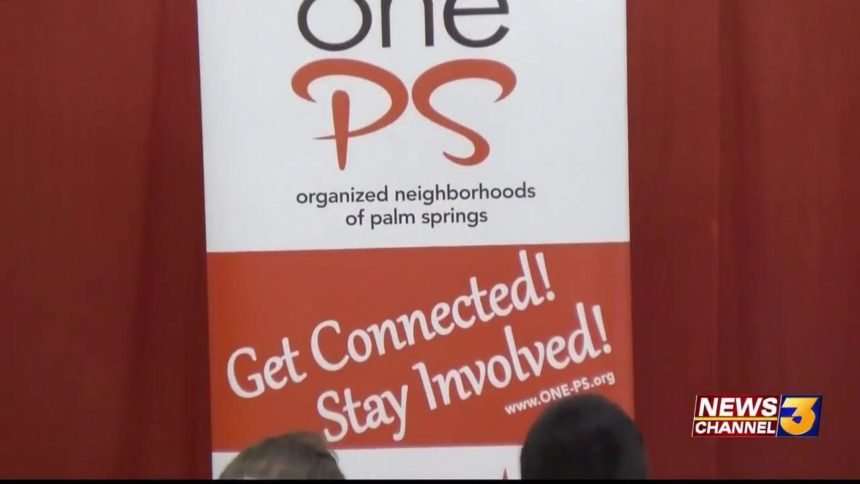 The four candidates running for a Palm Springs city council seat in District 1 participated in a forum Sunday afternoon.

The open forum was hosted at Demuth Community Center, sponsored by the group ONE-PS and members of local neighborhood organizations.

Candidates met dozens of members of the community who showed up to listen. Each candidate then answered questions that had been sent in ahead of time covering topics such as development downtown, the representation of minorities and homelessness. “The questions really reflect the interests of the neighbors here in Palm Springs,” said Farran.

All four candidates spoke with News Channel 3 and shared what changes they’d like to see:

Les Young, a former banker, says he’s interested in continuing some of the efforts of the current council but making slight adjustments. “One of the things particularly, is I believe that [in regards to the] homeless, we look at three distinct communities here in Palm Springs. We’re doing a lot with what I call ‘low-hanging fruit’ those that are almost homeless and those that have been homeless for a while. What I’d like to see us do is put some attention onto that last third which are drug induced and those that are mentally handicapped,” said Young.

Grace Garner, an attorney specializing in employment and municipal law, says she wants to focus on equal representation, among other causes. “The big thing for me about running was wanting to be able to provide representation for all of Palm Springs. I’m a second generation resident and what I noticed a lot was there was a lot of good intention, but sometimes just certain voices were left out. My family is Mexican and so, for instance, the leaf blower ordinance i made a big push to make sure that there was information disseminated in Spanish, said Garner.

Scott Myer, a civil rights attorney, says he hopes to bring fresh ideas to the table from a new perspective. “The community seems to really appreciate the fact that they are now hearing from us. There are a lot of different issues…different people have different issues. I mean we have roads that flood out, there’s noise from some of the events and cannabis odors that come from the grow facilities that go into neighborhoods,” said Myer.

Michael Shogren, who works in real estate, says he want to make significant changes to infrastructure, taking a proactive approach to the effects of climate change. “My biggest issue in my district is our commutes and our roads. Our roads currently are just…with the Valentine’s Day flood…it was something that was just so terrible. And it seems like, obviously climate change is a real thing and these things are going to happen time and time again. And if we don’t fix these problems now, we’re going to be in a lot of trouble in our economy with tax payers and revenue coming in because if you can’t drive we can’t survive,” said Shogren.

Forums will also be held for candidates running in district 2 and 3 in the upcoming weeks. For more information about candidates and the election, click here.