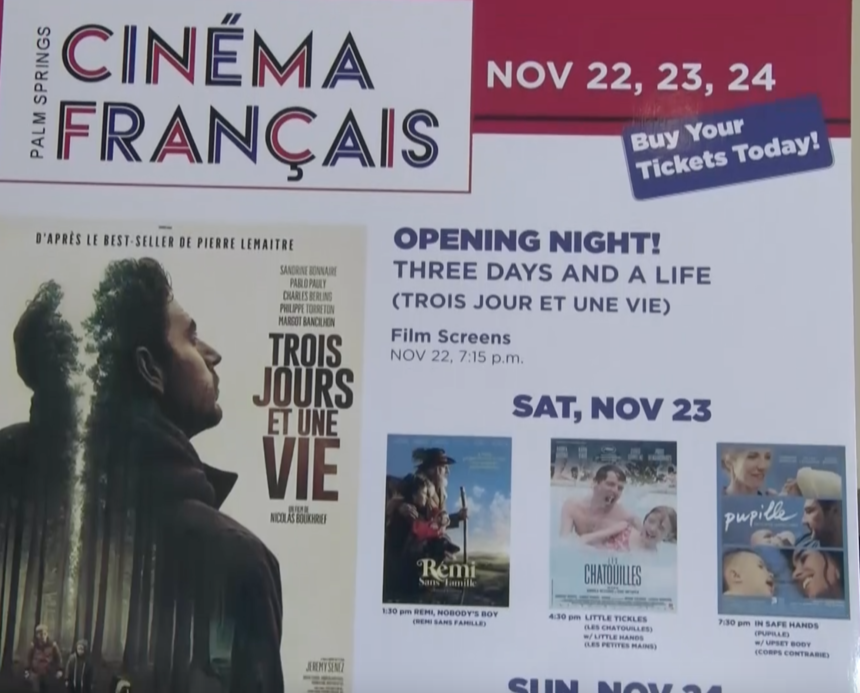 The 2nd Annual Cinema Francais, a french film festival is coming to the Camelot Theater at the Palm Springs Cultural Center November 22 - 24.

“I think it’s just great to support Camelot and support something new in town and watch it grow and the films are just fabulous," Fromm said.

There are seven films all with English subtitles.

“Opening night on Friday is ‘Three Days in a Life’ and it happens to be my favorite so I would say to people if you have to pick just one this would be it," she said. "It’s a suspense movie which is one of my favorite genres and has some twists and turns that you don’t expect," she added.

Then on Saturday morning “Remi” is a great family movie about a little boy who’s an orphan.

At 4:30 p.m. on Saturday will be “Little Tickles," a heavy drama about a woman who was abused as a child.

“What’s so interesting about this film is that it’s a true story," Fromm said. "The woman who plays the mother wrote it and it’s about her childhood," she said.

At 7:30 p.m. on Saturday is “In Safe Hands” a movie that shows you how adoption works in France.

Sunday morning is “Someone Somewhere.”

“If you want something very french this is the one," Fromm said.

“It’s a little bit sad but it’s a great story and it’s about a young man whose sister suddenly dies and he gets to take care of his niece which wasn’t in his plans," she explained.

“If you saw the ‘Joker’ and you thought Joaquin Phoenix was a maniac, this guy’s going to give him a run for his money," she said.

Fromm also tells us going to see a French film opens your eyes to other parts of the world.

“If you haven't seen a French film and you’re afraid of reading subtitles give it a shot!" she said.

Tickets can be purchased at the Camelot theater box office or visit https://psculturalcenter.org/