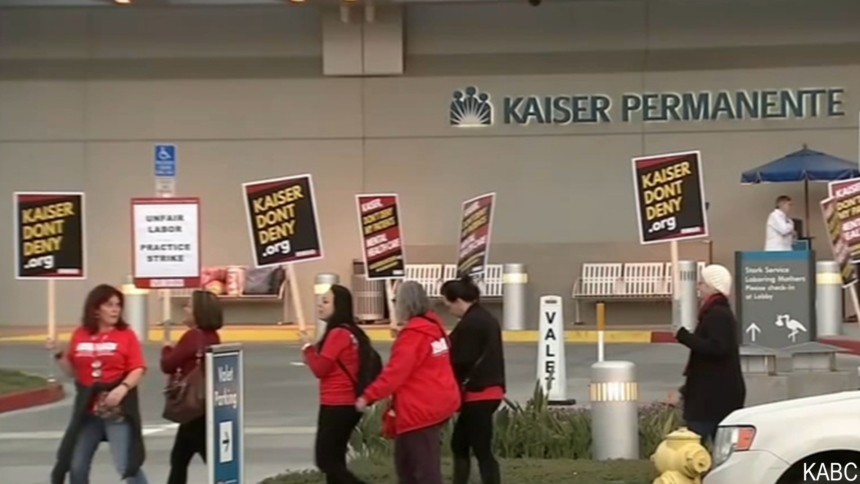 Thousands of mental health professionals at Kaiser Permanente facilities in Riverside County and across the state hit the picket lines today, beginning a five-day strike amid a continued labor standoff.

The walkout by the National Union of Healthcare Workers, representing roughly 4,000 psychologists, therapists, psychiatric nurses, and other healthcare employees, had been planned in November but was delayed out of respect following the death of Kaiser CEO Bernard Tyson.

Union officials said the walkout could result in the shutdown of more than 100 Kaiser clinics and medical facilities ``from San Diego to Sacramento.'' Kaiser officials insisted they were doing everything they can to minimize disruptions to patients, but acknowledged that some appointments may need to be rescheduled.

NUHW accused Kaiser of forcing clinicians to ``accept significantly poorer retirement and health benefits than Kaiser provides to more than120,000 other employees in California.''

Mental health has been underserved and overlooked by the Kaiser system for too long,'' Ken Rogers, a Kaiser psychologist, said in a statement released by the union.We're ready to work with Kaiser to create a new model for mental health care that doesn't force patients to wait two months for appointments and leave clinicians with unsustainable caseloads.''

But Kaiser officials condemned the walkout, saying the sides have been working with a neutral mediator who recently proposed a compromise, which the union rejected.

... A strike does nothing to help our important work to advance care, nor does it help us achieve a mutually beneficial contract,'' Russell said.All it does is put our members in the middle of bargaining, which is not fair to them, especially during the holidays when rates of depression can spike and our patients are counting on their caregivers to be there.

``Rather than calling for a strike, we ask that NUHW's leadership continue to engage with the mediator and Kaiser Permanente to resolve these issues.''

NUHW workers also held a five-day statewide strike last December. Union leaders claim that mental-health clinics continue to be understaffed and ``patients are routinely forced to wait six to eight weeks for therapy appointments and clinicians are so overbooked that they have to work after hours trying to help patients who can't wait for care.''

Union officials said they also want other safeguard written into their contract, such as ensuring clinicians have time to do their jobs well, which includes being able to chart patient encounters, communicate with social service agencies and respond to calls and emails from patients who can't be seen.'' The union also called forcrisis services'' in all clinics so patients ``don't have to be unnecessarily hospitalized and clinicians don't have to cancel appointments to treat patients in desperate need of care.''