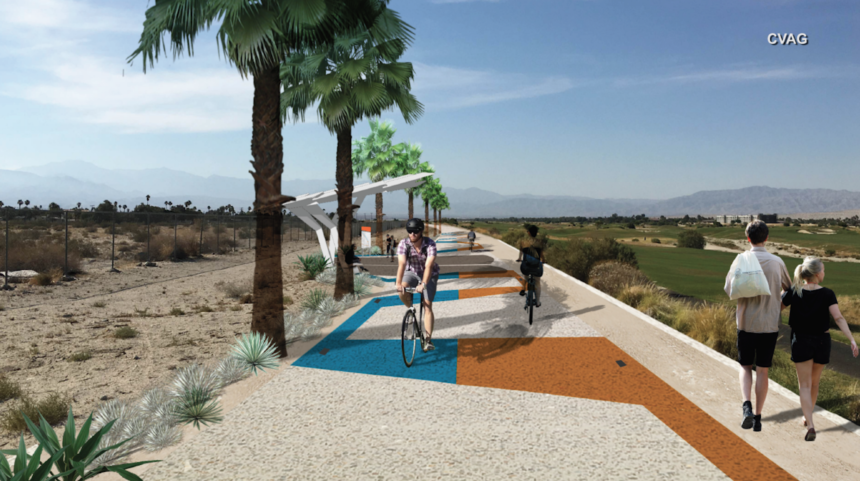 The Desert Healthcare District Tuesday night approved a grant agreement for $10 million in funding for the CV Link, following through on a commitment first made in 2013.

The vote means construction will move forward in 2020 for the next 15 miles of the 50-mile path through most of the valley for bikers, runners and electric vehicles. It is planned by the Coachella Valley Association of Governments, or CVAG.

Currently, only a little more than 3 miles of the active transportation path have been built in the west valley.

The $10 million approved by the Desert Healthcare District board is crucial, because some of the other funding for the $100 million project was dependent on it. Earlier this year, the board began reconsidering the grant.

"There was certainly some uncertainty there," Kirk said.

"It has been a challenging policy decision for the board, given that we have significant healthcare needs in the district," said Conrado Bárzaga, M.D., CEO of the Desert Healthcare District.

The board's vote passed 5 to 2 Tuesday night, with dissenting board members citing possible other uses for the money.

"There's been people asking us for a fraction of that money to help scrub down schools that have been affected by mulch fires, that are asking us to help figure out water situations in mobile home parks," said Karen Borja, one of the board's directors.

Tim Esser, founder of the Tour de Palm Springs, said he's glad the board recognized the importance of the CV Link.

"I think the health district really did a good decision, really seeing ahead of the lives they are saving and keeping everybody healthy and out of the streets at the same time," Esser said.

And CVAG said they were appreciative the board honored their commitment.

"When you make a commitment to somebody, whether its an agency, a person or an idea, stick with it," Kirk said.

Construction of the next 15-mile portion is expected to begin next year. CVAG said the whole project could take anywhere from 3 to 5 years to complete.