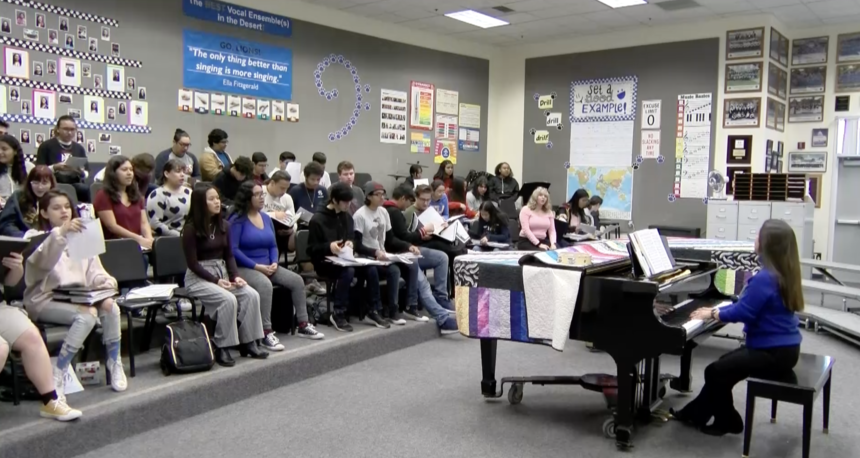 A beloved local high school choir is hoping to raise enough money to go to a Broadway workshop in New York this February 2020.

Eye on the Desert’s Caitlin Thropay met with the choir to learn more about this incredible opportunity and why they are in need of the community’s help.

May Le Roy’s high school choir is gearing up for the opportunity of a lifetime, the chance to sing on a Broadway stage in New York City.

This is the first time the Cathedral City High School choir has been selected to participate in the Broadway concert series.

Over 250 people from all of the country will be there. All choir students can go, but the challenge is coming up with $2,200 per student.

“Not a single person in the choir that’s going has actually raised enough money to pay off the trip,” Bataller said.

They started fundraising at the beginning of the school year, but with only two months left to raise the money students are reaching out to the community for help.

“Currently, we do a lot of individual fundraising so we have discount cards that we sell and we do a lot of mailing to local businesses and it is a lot of money and yes it’s true I come from a very low-income family and a single mother so it’s very difficult," senior choir student, Nathan Carlin said.

The choir is doing everything they can to make sure that every student who wants to go can go.

“If there is a student who finished fundraising and was able to get their amount, we keep fundraising because we’re a unit here, we’re a team so we fundraise for each other so that we all have the opportunity to go,” Carlin said.

But the students tell us this year has been especially difficult to get the funds they need.

“Recently with the passing of our former Mayor Greg Pettis, may he rest in peace, he was a big support for us and so this year not having him, but we still have many other supporters out there who are really trying to help us but this year we have less students coming to the trip so there are not as many students helping to fundraise,” Carlin said.

They hope to leave for New York on February 14th.

“It is a very expensive trip but in the long run it’s going to be worth it because it’s not that we’re just going to see a show on Broadway, we’re actually going to be performing on Broadway,” senior choir student, Kennedy Sgouromitis said.