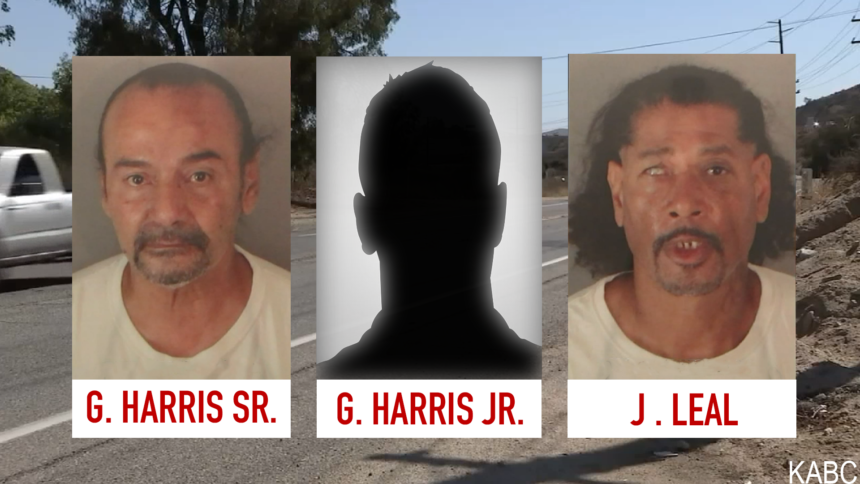 A third man sought in the murder of a woman whose body was dumped near a lake in the Temescal Valley two decades ago was in custody today, more than a year after another man originally convicted in the murder was exonerated and released from jail following a review of forensic evidence.

Googie Rene Harris Jr., 40, was arrested in Palm Desert on Friday, Dec. 13 and is scheduled to be arraigned on a first-degree murder charge this afternoon at the Riverside Hall of Justice.

Harris Jr. is the son of Googie Rene Harris Sr., 63, of Jurupa Valley, who is also charged in the murder along with Joaquin Lateee Leal, 53, of Compton. Leal is Harris Sr.'s nephew.

Prosecutors allege all three men conspired to kill Terry Cheek in April 1998, who was Harris Sr.'s wife at the time.

A watch found near the scene where Cheek's body was found has been connected to Harris Jr. through the results of DNA testing,'' according to a statement released by the Riverside County District Attorney's Office.It is
believed that the watch was knocked off of Harris Jr.'s arm when the victim's body was left at the scene.''

District Attorney Mike Hestrin announced on Oct. 15, 2018 that Leal and Harris Sr. had been charged in the crime.

The announcement came following the release of Horace Roberts of Temecula, who had been serving his 19th year of a life sentence.

Hestrin said Roberts, convicted of Cheek's murder in 1999, was released from state prison on Oct. 3, 2018 based on a review of forensic evidence that exonerated the man who has 60 years old at the time of his release.

The D.A. credited attorneys at the San Diego-based California Innocence Project, which took on Roberts' appeal in 2004, with prompting the agency's Conviction Review Committee to take a comprehensive second look at the case.

What happened to Horace Roberts is tragic,'' Hestrin said at the time.We as prosecutors always strive to be vigilant and follow the truth. Once I learned of the new DNA findings, I immediately directed that all charges be dismissed. Mr. Roberts has my commitment that we will aggressively apply new technologies to past, present and future prosecutions.''

Hestrin said the project's examination of DNA evidence not introduced during Roberts' trial proved pivotal in securing his release.

The same evidence will now be used in the proceedings involving Leal, Harris Jr. and Harris Sr.

According to prosecutors, Roberts and the victim worked together and had been intimately involved, although she was married to Harris Sr.

She was strangled and her remains found on a rock outcropping near Lake Corona in the Temescal Valley.

Sheriff's investigators soon turned their attention to Roberts as a result of evidence gathered at the scene and interviews conducted in the days following her death.

Roberts' supporters had long alleged that her husband and Leal framed him for the murder.