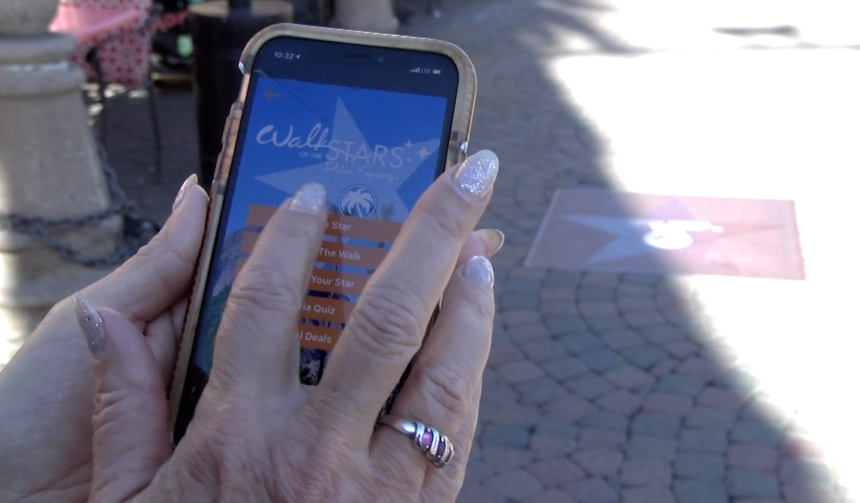 The Palm Springs Walk of Stars also has a brand new, free app that navigates you to the stars you wish to go to.

The first star, the app took Nona and Caitlin to was Sonny Bono’s star.

"Of course, he’s half the musical duo of Sonny and Cher, but also he was our Mayor of Palm Springs from 1988 to 1992 and more importantly he started the film festival here in Palm Springs in 1990,” Watson shared.

The location of Bono's star is 101 South Palm Canyon, outside the Starbucks Reserve. His star was inducted in May 1996. Fun fact, Bono has two stars on the Palm Springs Walk of Stars. His second star is right in front of the Sonny Bono statue.

The app then led them to another star with film festival ties.

“We’re at the amazing Harold Matzner," Watson said. "He is the Chairman for the Palm Springs International Film Festival,” she added.

Matzner is a local philanthropist and also the Chairman of the McCallum Theatre and Vice Executive Chair of the Palm Springs Art Museum. His star is located at 155 South Palm Canyon (near Sonny Bono statue). Matzner's star was inducted in April 2006.

"Of course, she was the host of Entertainment Tonight for 30 years and also the Mistress of Ceremonies for the Palm Springs International Film Gala since 2004,” Watson said.

Hart's star is located at 155 South Palm Canyon, near the Sonny Bono statue. Her star was inducted on Saturday, December 7, 2019.

Next, Nona and Caitlin used the app to find Sophia Loren’s star.

Loren was an Italian, Academy Award winning actress. She was a star from the Golden Age of Hollywood. Loren also won a Grammy, five Golden Globes and has been honored at the Cannes Film Festival and the Venice Film Festival.

The location of her star is at 135 East Tahquitz Canyon, near Oscar’s and Retro room. Her star was inducted in January 1994.

The last star they visited was Frank Sinatra's star.

“One of the famous Rat Pack members," Watson said. "He actually won the Career Achievement award from the Palm Springs International Film Festival in 1993,” she added.

Sinatra was a famous singer, actor and one of the most popular and influential musical artists of the 20th century.

He was best known for his hits “Fly Me to the Moon," “My Way" and “New York, New York." Frank Sinatra is one of the most famous residents to live in Palm Springs. His primary home was here for more than 50 years.

Sinatra's star is located at 100 South Palm Canyon, outside Welwood Library. His star was inducted in January 1994.

Kier is a German born actor and cult film actor. He worked with Andy Warhol, Jim Carey, Lauren Bacall and Madonna. Kier is also a popular resident of Palm Springs. In 2020, the Palm Springs International Film Festival will screen his film.

Kier's star will be located at 135 East Tahquitz Canyon, near Lauren Bacall and Sophia Loren's stars.