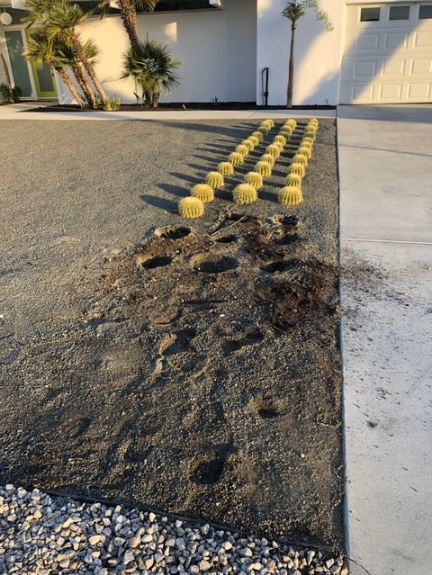 A thief targeting barrel cacti made off with several of the prickly plants at one Palm Springs home early Tuesday morning just after 3 a.m.

Home surveillance video captured a white sedan pull up to the home at East Via Escuela near North San Gorgonio Road. The driver proceeds to exit the vehicle and pull out several barrel cacti in the front yard of the home.

"He got out," homeowner Ken Sim said. "He had a long device to scoop out the barrel cactus. He did it really fast."

The thief loaded his trunk and made off with about 8 cacti, according to Sim.

Today trails of dirt lined the driveway where the prickly plants were carried over. A drip irrigation system was also damaged.

Sim says this is the third time thieves have targeted his barrel cacti. The two most recent robberies happened already one week into 2020. The first occurred last year.

"I don't know whether it was the same person but he took more. I think he took 30 of them," Sim said.

Sim and his partner had since replaced the missing plants. The salvaging was short-lived, when a thief stole some on Sunday and then again early Tuesday morning.

"Third time already. It's a violation. It's about the principle. It's not about whether it's a cactus; most people would just say, 'Hey you know what, so what, it's a cactus. Replace them and get on with life,' but that's not the point."

Sim says he does not plan to replace the stolen plants a second time unless his partner wants to.

They have since contacted the Palm Springs Police Department to file a report. Police say they are in the process of reaching out to Sim for the surveillance video.