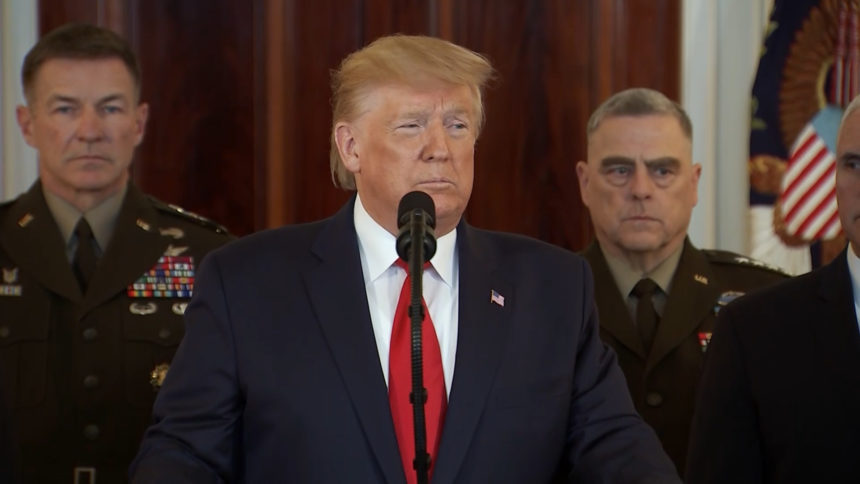 President Trump addressed the nation over escalating tensions with Iran today. The speech was an apparent change of gears following the past week's military action between both countries.

“The United States is ready to embrace peace with all who seek it," The President said.

The President's national security team was by his side as he spoke on the heels of an Iranian counter-attack the night before. The country fired at least a dozen missiles at an Iraqi air base that houses U.S. troops.

Just 3 days prior the administration ordered an airstrike in Iraq that killed Major General Qassem Soleimani.

“In recent days [Soleimani] was planning new attacks on American targets, but we stopped him. Soleimani’s hands were drenched in both American and Iranian blood. He should have been terminated long ago," Trump said.

Associate member of the Republican Party here in the desert, Mike Cericola, believes Mr. Trump was justified in the attack.

"He defended the United States of America. That’s his job, to defend the country.," Cericola said.

President Trump cited an imminent attack on Americans, which made the airstrike necessary.

"They have proof, unless you want to call the United States intelligence agency liars, they had proof," said Cericola.

Director of the Democratic Headquarters of the Desert, Elle Kurpiewski, thinks otherwise.

"We have young men and women who have been deployed. He was supposedly remember, reducing our military in the middle east. [...] I want to know the truth. If you’re going to send troops over there to die, what are they dying for?"

Both parties are seemingly at odds over the recent military action.

"Yesterday was a joke. Yesterday I believe [Iran] honestly wanted to show the Iranian people that they were firm, they were retaliating." Cericola said.

No Americans were killed in the attacks.

President Trump says he will be imposing additional economic sanctions on the country until it "changes its behavior."