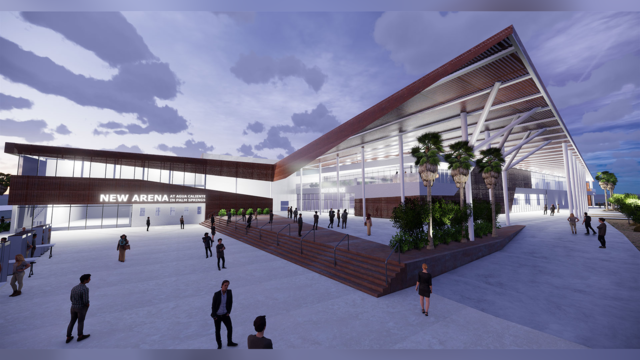 A group of a dozen Palm Springs residents mailed letters to state officials Thursday asking them to become involved in a proposal by the Agua Caliente Band of Cahuilla Indians to build an arena on tribal land in downtown Palm Springs.

Their group, Palm Springs Together, believes the plan to build the arena should require drafting of customary environmental reports.

The group paid for an open letter to Gov. Gavin Newsom that was printed as a full-page advertisement in today's Los Angeles Times.

We respect the tribe's property rights, but we have rights too, namely to a healthy environment and quality of life,'' the letter reads.We are concerned about a variety of environmental impacts.''

Palm Springs Together's quest for state involvement regarding the proposed arena could be futile.

The Agua Caliente Band of Cahuilla Indians is a federally recognized tribe and a sovereign nation with full authority over its land-use decisions, meaning it is not subject to the California Environmental Quality Act land use requirements.

A report from Palm Springs' Department of Planning Services released in December noted ``the city has no authority to approve or deny projects undertaken by the tribe on its own land.''

The tribe plans to build a 252,000-square-foot arena on 16 acres of tribal land at the corner of North Calle Encilia and East Amado Road near the tribe's casino and the site of future tribal developments.

Palm Springs Together argues that the project has environmental implications for surrounding non-tribal lands, and that the tribe should study those impacts, including alternative proposals.

The group says the arena as proposed would significantly increase greenhouse emissions stemming from the construction of the building itself, as well as from the ``thousands of new car trips to the tribe's gaming and arena compound,'' according to the letter.

The letter comes a month after residents filled the Palm Springs Convention Center for what city officials said at the time was the only public meeting regarding the proposed development.
Days before the meeting, the Palm Springs City Council approved a resolution urging the developers to build on-site parking and adhere to other mitigation recommendations.

The resolution came days after the city released a report that found that the $250 million arena would be short 1,600 parking spaces, and that parking meters could be necessary.

However, Cary Brazeman, founder of Palm Springs Together, said the city's requests have no teeth -- they are recommendations.

That's the oddity,'' Brazeman told City News Service.The project is moving forward with no clear cut mitigation measures and none that are binding. They are recommendations but they could have been tougher.

``No where else in California would a 11,000-seat entertainment arena be built without an environmental impact report. This is a project of mammoth proportions.''

A spokeswoman for the Agua Caliente Band of Cahuilla Indians could not immediately be reached for comment.

The tribe announced in June it had reached an agreement with the Oak View Group, a venue development company, to construct the privately financed area.

The arena is also expected to be the home of the top minor league affiliate of Seattle's NHL expansion team. Oak View Group and the Seattle NHL franchise have jointly submitted an application for an American Hockey League expansion team that would play at the arena beginning in fall 2021, tribal officials have said.

Groundbreaking is scheduled for February, and the arena is expected to open by fall 2021 in coordination with the Seattle team beginning play, the tribe said in June.

The arena will be built to accommodate conventions, large meetings, international events as well as award shows and exhibitions, according to the tribe, and will have approximately 10,000 seats for hockey games and 11,000for entertainment events.