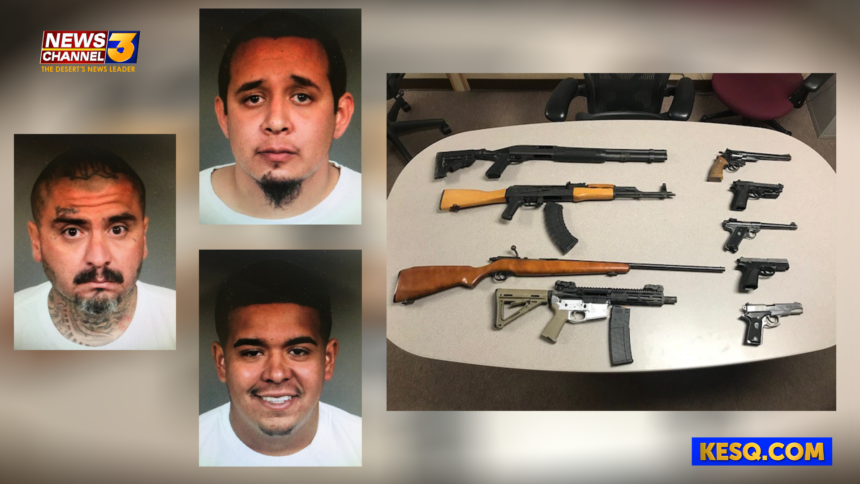 A traffic stop conducted by Indio Police earlier this week led to the arrest of three suspects and the seizure of a cache of weapons in Thermal, the Indio Police Department announced Friday.

On Wednesday, IPD Street Crimes Detectives conducted a traffic enforcement stop at the intersection of Highway 111 and Oasis Street. During the stop, it was determined that the driver, 22-year-old Nicholas Delatorre, was on probation.

After a probation search of the vehicle, Delatorre exited the driver's seat and was found with a loaded 9mm handgun with a high-capacity magazine in his waistband.

He was arrested and booked into Indio Jail for weapons violations, including being a felon in possession of a firearm.

During their investigation, detectives learned that Delatoree was allegedly in possession of more firearms at his Thermal residence. A warrant was obtained and executed at the residence with the assistance of members of the Coachella Valley Violent Crimes Gang Task Force.

During the warrant service, two people exited into the backyard and disposed a pair of rifles. All occupants of the home were taken into custody without incident.

Eight additional firearms were recovered during the search of the residence. Two suspects arrested at the residence have been identified by IPD: 24-year-old Robert Alberto Aroz and 39-year-old Jose Juan Gaytan.

Gaytan and Arox were booked into Indio Jail for multiple firearms and narcotics violations, including possession of narcotics for sales and being a felon in possession of firearms.