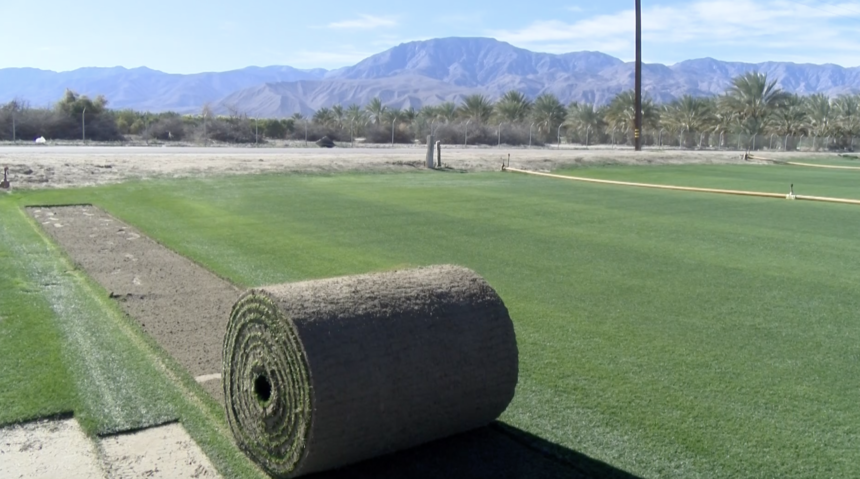 Did you know we grow Super Bowl turf right here in our valley?

With Super Bowl 54 on Sunday, News Channel 3's Caitlin Thropay brings you a look at some of the game-winning greens grown right here in our own backyard by West Coast Turf.

A little piece of home was at the center of this year’s Rose Bowl, Holiday Bowl, and Cheeze-it Bowl.

You may not realize it while watching these big games, but the field you were looking at was grown in the Coachella Valley.

West Coast Turf is the company that has been growing turf in the valley since 1990. Their affiliation with the NFL started three years later.

“When you get the call from the NFL you never say no and it’s pretty exciting,” Director of Marketing for West Coast Turf, Danielle Scardino told News Channel 3.

And that call came after the 49ers and the Cowboys were getting ready for a playoff game. The field got rained out at Candlestick Park in San Francisco so West Coast Turf was called-in to save the day and the game went on as planned.

In the 30 years following that, West Coast Turf has since done eight Super Bowls. The last one they did was Super Bowl 50 at Levi's Stadium.

Right now, they are preparing fields for other professional sports leagues.

And not every field is the same. “All of the groundskeepers have their own secret recipe for success,” she added.

For example, the Los Angeles Angels’ field has different seeds than the Oakland Athletics’ field because of the different climate they’re in.

“The NFL gets a hold of us for the specific job and then they’ll come out here and give me what they need as far as timing and variety and square footage,” he said.

Every day leading up to the big game, the grass is mowed and watered to perfection.

Then it gets rolled up and loaded on 40 trucks. That’s how many are needed to fill a football stadium.

“It takes about 110,000 square feet of turfgrass to sod a field but that includes the sidelines and the endzones,” Scardino said.

The turf is purposefully made super heavy because it doesn’t have much time to take root before game time.

Though this year’s Super Bowl 54 will not feature our local turf, that may be because the last time we sent turf to Miami, it cost about $250,000 in freight.

But no matter where our all-star turf goes, it’s thanks to our hardworking home team for making it look and feel pristine.

“I’m proud because I know I had a part in that,” Contreras said.

“Sometimes we don’t really pay attention to who’s winning the game," Scardino said. "We root for the grass and make sure that the grass is looking good. As long as the field performed well then we won,” she added.