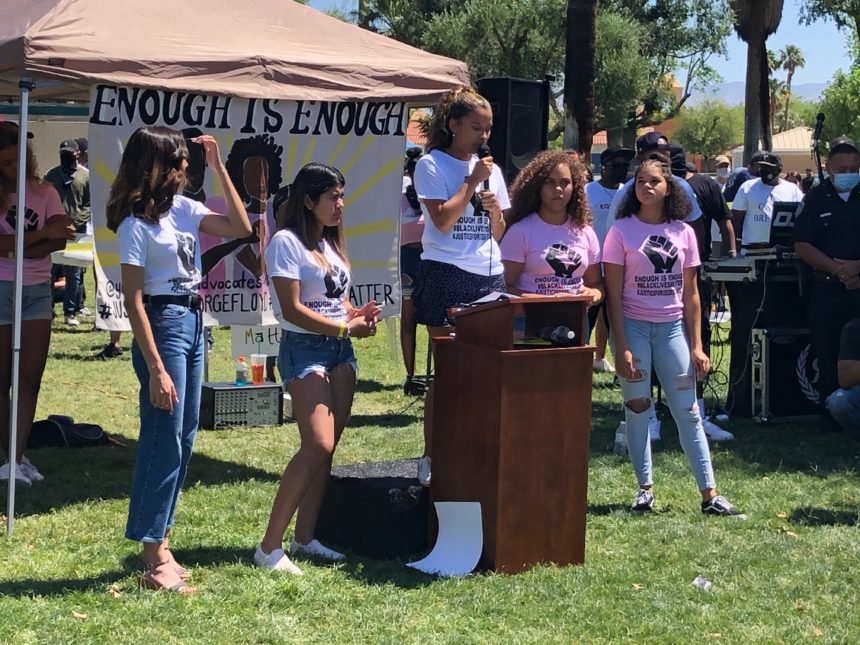 A group of eight teenagers joined by nearly a thousand protestors on Saturday morning for a planned peaceful protest in Palm Springs at Ruth Hardy Park.

“Its just not one week of racism awareness," said Hina Malik, Young Justice Advocate. "Its everyday, the change starts now.”

“Enough is enough," said Dawnese Doty, a protestor. "Its time to really seek change for the next generation coming up.”

The call for change comes from the killing of George Floyd and many others who experienced police brutality and racism in America.

Protestors chanted, "No justice, No peace," "Black Lives Matter," "Don't Shoot." They held up signs as they circle around the park for a cause.

“I have a two year-old daughter at home and I just want for her to grow up in a better world and for her to have a better experience in life and not have to worry about the social injustice," said Naomi Nelson, a protestor.

“For the first time in our nation’s history, its not just black people who are upset," said Pastor Kephyan, a guest speaker. "We’re all upset.”

The crowd gathered together to hear from multiple guest speakers including from the young activists who put on this peaceful protest.

“Where cameras aren’t enough to stop injustice from occurring in a broken system," said Malik. "Too long we have kept quiet and have kept our head down and thats part of the problem.”

Our local congressman shared his words.

“We don’t need to wait for congress to get it together." said Congressman Dr. Raul Ruiz. "The power is derived from the people.”

“We’re here to listen and we got open doors for dialogue to see what we can workout together and make it better for all of us," said Chief Bryan Reyes.

According to Tarpening, about 100 people showed up 15 minutes prior to the protest with many more showing up as the event took place. Here are more photos from the event.

The girls, who go by the "Young Justice Advocates" on social media, have planned an agenda that includes multiple guest speakers.

Since first reported, the event location has been changed to Ruth Hardy Park. The organizers said it was due to the overwhelming response from the community. The park provides a safer and larger location to gather.

For more information on the protest, visit the event's website.