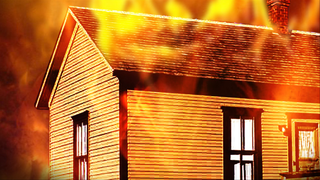 It happened just after midnight on Santa Barbara drive.

Firefighters say the house was a total loss with houses on either side of the home showing signs of heat damage.

"We did have fire on both sides of the structure, on what we call exposures. We addressed those first then proceeded to attack the main fire." said spokesperson for the Cathedral City Fire Department, John Muhr.

Two people have been displaced from the home, but no injuries have been reported.

Power lines were down in the area, but Southern California Edison is not reporting power outages in the area.

The cause of the fire remains under investigation.

Stay with News Channel 3 for up-to-the-minute developments on this story.