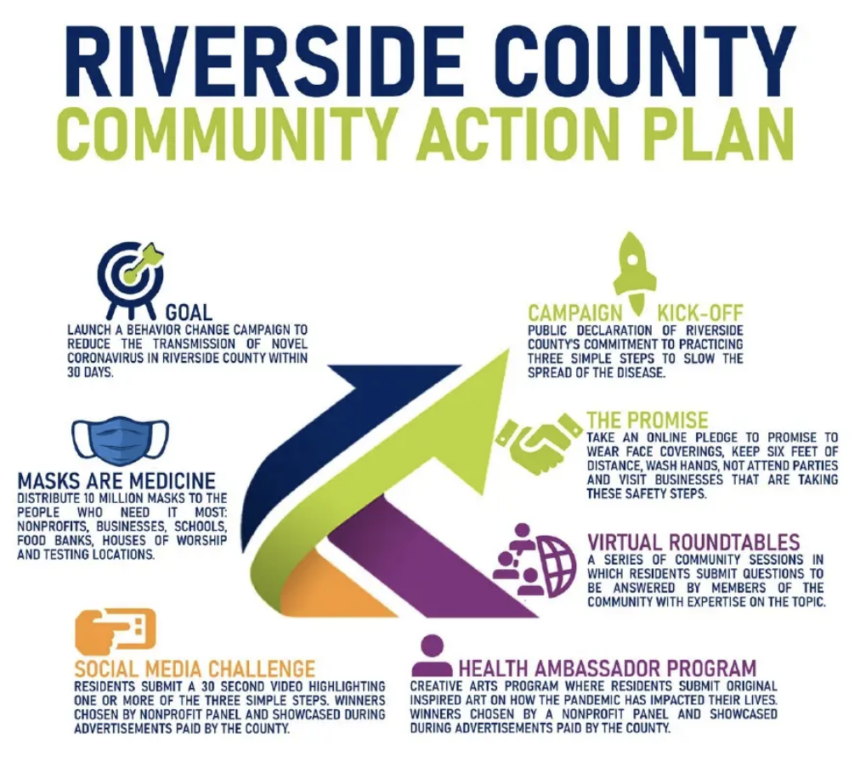 In order for Riverside County to get off the state’s watch list 3 things need to happen:

News Channel 3 spoke with the Riverside County Department of Public Health to see how far away we are from being taken off the state's watch list.

“Right now we’re at 156 which sounds like a lot but we’ve gone down from over 200 in the last couple weeks so that’s a good trend," Jose Arballo with Riverside County Department of Public Health told News Channel 3.

Arballo said the positivity rate from people tested is also going down.

“Right now, we’re just a little over nine percent and you have to get to eight percent. That’s the state’s threshold so if we get those two things, those numbers down to those levels then at some point we would be able to see if we can get off the state’s watch list,” he said.

He also said it’s too hard to predict when exactly we could be taken off the list especially with the Labor Day holiday around the corner which could impact our progress.

“As you can imagine trying to predict things in this COVID time is a difficult thing," Arballo said. "I will say this, we were over 200 maybe two weeks ago, now we’re at the 150s so that’s a good reduction so if we continue at this rate it wouldn't really be that long before we’re at the 100 threshold,” he said.

He also said our hospitalizations and ICU cases are down as well.

“So those are good things and those trends are going in the right direction," he said.

Last week, Riverside County sent a letter to the state with a proposed reopening plan.

"I appreciate the County reaching out and working with the State on how to safely reopen," Mayor of Palm Springs Geoff Kors told News Channel 3 in a written statement. "We need to learn how to best return to a more normal way of life and help our businesses while protecting the health of our residents and workers," he added. "Given the surge in cases that resulted after the last reopening, it is important to make sure that decisions are made based on medical knowledge and data so as to avoid another surge which could result in reclosing of businesses, both of which would be devasting." he said.

During a meeting on August 20th with city leaders and Supervisor Manuel Perez, Mayor Kors shared his thoughts.

"At the meeting, I suggested that the County work with the State on the specific criteria for reopening, plans for addressing any increase in cases that may result, and specific guidelines setting forth what would lead to the closing of any businesses or activities if there is a resulting surge," he said. "For reopening to be successful, we will need everyone to follow the rules for face coverings, physical distancing, and not attending large gatherings," he added.

Desert Hot Springs Mayor, Scott Matas was also a part of that meeting. He is also on board with what the County has proposed.

"We must open small businesses as soon as possible," Matas said in a written statment to News Channel 3. "The County is planning for this and I support it," he added.

We also spoke with the City of Indio Mayor, Glenn Miller about the County's proposed reopening plan.

“I was excited that they put that forward," Miller told News Channel 3. "I was a little disappointed that they didn’t get with the rest of the cities including Blythe and ask us our opinion on where we really thought we could benefit and help our businesses the most in the communities we represent,” he added.

Miller said he feels his city is ready to reopen despite having some of the highest rates. He said they are also the city with the most people. He also shared what the overall consensus is from other cities.

“If I was to take a poll I would say it’s the two outskirts are a no and everybody in the middle including Desert Hot Springs and Blythe, Blythe’s a definite yes they want to open but I would say all the rest of us are like we need to open but we need to do it safely," Miller said.

We also spoke with John Aguilar, the Mayor of Cathedral City.

“I have to say I’ve expressed reservations before and I still have them about reopening before we have the scientific data that that’s the right thing to do," Aguilar said.

Aguilar said though he’s cautious, he’s not opposed to the idea of the county reopening in sections.

“What I’m hearing consistently is, 'Don’t do anything that’s going to put me or my family at risk by doing something prematurely,' and that’s what’s driving my feelings,” he said.

Miller said reopening by section is not a good idea.

“I don’t think it would really work because then you’re picking winners and losers and I think it really falls on the county to give us an overarching support and then let each city adapt to whatever it is they think they need," Miller said.

We asked Riverside County about this idea.

“When we talk about opening up the economy for the county we look at it right now as a single county, a single thing so whatever we do would be a countywide request for reopening," Arballo said.

If the County's proposed reopening plan gets approved, Palm Springs Mayor Kors believes his city will be ready.

"The numbers in the County are moving in the right direction, which is wonderful news, with a declining positivity rate, reduction in hospitalizations and a slowing of the increase in cases," he said in a written statement to News Channel 3. "The State has made it clear that they will work with each County and only approve plans that they believe are safe from a public health standpoint.  I am optimistic that any plan the State and County agree on will be one that will allow us to reopen in a smart and safe manner and that will have in place what needs to be done to protect public health," he said.

The Mayor of Desert Hot Springs said his city is ready to reopen as well.

"Our city is more then ready," Matas said. "We have had one confirmed small business close for good and multiple threaten to close if they are not able to open soon.  Contact tracing is not showing the hot spots to be small business.  The Governor needs to realize this and move forward with a reopening plan," he added.