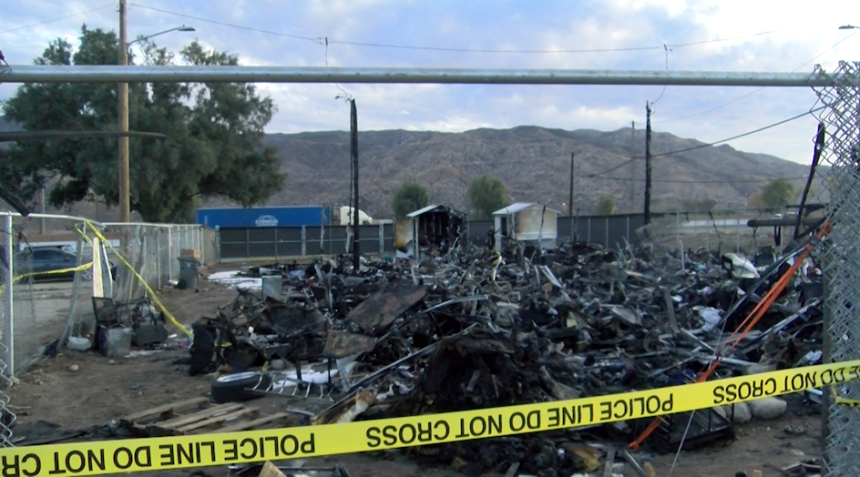 A total of 38 people are without a home after a fire tore through a Banning community Saturday afternoon. The fire erupted at about 12:48 p.m. on the 1900 block of E. Ramsey Street.

"The first engine got on scene and said there was multiple structures on fire," said Riverside County and Calfire Batt. Chief William Otterman.

The community was built in April to house several homeless people, and came to be known as Ramsey Street Village.

"There’s 20 total pods there and 19 of them were destroyed and 1 was heavily damaged," said Batt. Chief Otterman.

Two homes were left standing with extensive damage, while the rest were flattened. As of Saturday evening, mostly rubble and debris remained within a fenced area that police blocked off with caution tape.

"It’s unbelievable, a lot of things were going through my mind," said resident, Adrian Naranjo.

Naranjo and his father moved in about 2 months ago.

"I came from washing some clothes and as soon as I came out, all I heard was 'fire.' The first unit was burning," said Naranjo.

Residents gathered outside the fenced area as the Red Cross worked to house them in local hotels for the night.

Saturday's destruction marked a second time many residents found themselves without a home within the past year.

"The 40 individuals that we housed here, pre-COVID were living in an abandoned building and we were working with a property owner on eviction. It just turned out that with COVID we had to remove them from the building," said Banning City Manager, Doug Shulze.

The city eventually built what are called 'pallet shelters' in order to give many of them a place to stay, according to Shulze.

The news came as a disappointment after many local leaders worked together to develop the temporary housing project.

"When I heard about the fire obviously it’s devastating to know that we’ve lost that at least for the time being," said Shulze.

The next step will be determining what insurance will cover, and if the homes will get rebuilt.

In the meantime, the Riverside County Emergency Management Department will be working to find residents a temporary place to stay.

The cause of the fire remains under investigation. No injuries were reported.