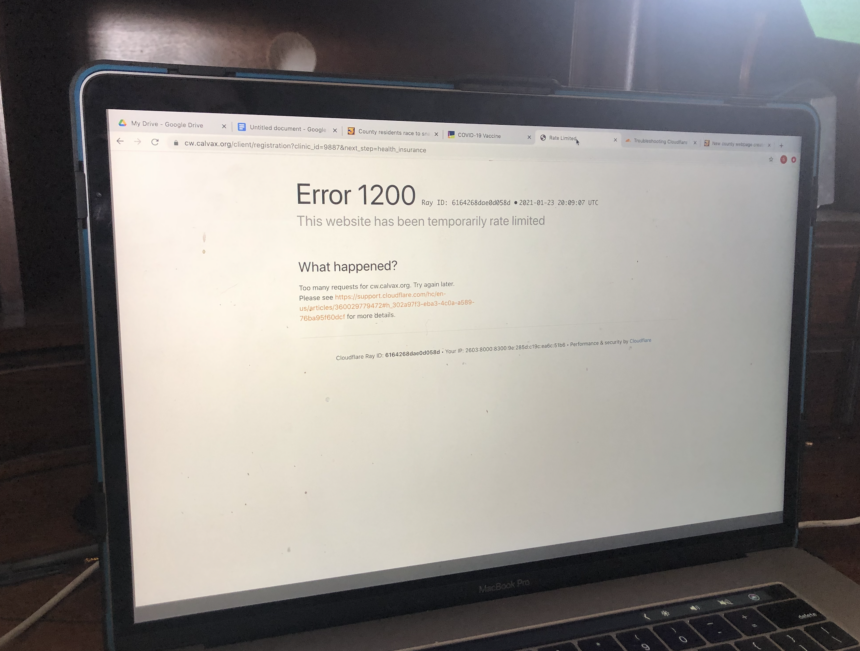 Hoping to answer the most pressing question residents have regarding the COVID-19 vaccine -- when can they get it --  the state today rolled out a pilot website on which people can sign up to receive alerts on when they're eligible and then schedule an appointment.

"I just can’t understand why they weren’t prepared for what was coming," said Garner Valley resident, Danielle Sprueill.

On Saturday roughly 10,000 appointments rolled out countywide in Riverside County right at noon. People had been sitting in front of their computer screens ready to go.

"One of the most frustrating things I’ve ever gone through," said La Quinta resident, Dennis Lanham.

Just minutes after the rollout Saturday, the site to get an appointment crashed. Users were met with an 'Error' message shortly after being rerouted to the state website. Some people got as far as filling out their information, while others received the message directly after clicking the 'Register' link. Appointments then filled up within 32 minutes, according to a county spokesperson.

"At one point I think we were monitoring somewhere between 40 and 50,000 people trying to get on at one time," said Riverside County Department of Public Health spokesperson, Jose Arballo.

We asked Arballo whether it would be possible to group certain parts of the county, or designate times for specific age groups above 65 to get a vaccine.

"I think again, that’s something that could be considered. Nothing is off the table."

The county had just updated its webpage after its site crashed on Thursday. Since then, they made a change to reroute users to the state's website.

"For the most part our website was able to withstand the surge that came to apply, it was the state portion of it that didn’t work so well," Arballo said.

The MyTurn system is operating on a trial basis for residents in Los Angeles and San Diego counties, with Gov. Gavin Newsom saying the system will hopefully be available statewide by early February.

The website, at MyTurn.ca.gov, allows people to input their basic information and learn if they are currently available to receive a vaccination and, if so, allow them to schedule a shot. People who aren't yet eligible can provide information on age and occupation.

"The most comprehensive end-to-end system"

On Monday, Newsom said the new system will also allow vaccine providers to input faster, more up-to-date information on the numbers of shots being administered, resolving what he called a frustrating lag time in reporting that often makes it appear fewer shots have been given.

"It's not just a notification system as some other states have or
a system for reservations just with state clinics, this is an end-to-end
system across the spectrum -- bottom up, top down, providers -- a whole
spectrum delivery system and a database that allows more immediate data to be transferred to the CDC,'' Newsom said.

The improvements Newsom outlined would be welcome change to many who are still left scrambling to find an appointment for their first or second dose of the vaccine in Riverside County.

Viewers flooded News Channel 3's phone lines and email Saturday after people all over the county had waited anxiously to snag an appointment.

"The county opened the registration appointments at noon today for approximately 10,000 appointments for next week's clinics. The new county vaccine website functioned as designed and provided uninterrupted access to the upcoming schedule of vaccine clinics.

Unfortunately, the state's registration website was not able to handle the traffic. As a result, many residents saw an error when attempting to link to the state site. The county team continues to address technical issues with the state regarding their registration system.

Many residents were able to get through on the state's registration site as all appointments filled within 32 minutes. We continue to ask for patience as the demand for vaccine far outweighs the amount of doses received locally and resulting available appointments.

Each week, more clinics and appointments will be announced as we receive more vaccine in Riverside County. Within three to four days of receiving vaccine, Riverside County distributes all of it to a combination of private providers and directly to the community at public health vaccine clinics. These vaccine clinics have been a very effective way to quickly administer shots to residents within a few days of receiving it. The county continues to work with the state on the registration process to make registering for these clinics easier."

Coming up all new at 6 p.m. we're speaking with county to see whether there are plans in place to streamline the process.