Dozens of people gathered at James O. Jessie Desert Highland Unity Center to commemorate the first annual celebration of Juneteenth. President Biden signed legislation on Thursday to officially designate June 19 as the federal holiday date, which signifies an end to slavery in the United States.

"We have camel rides, we have free food, we have water stations, arts and crafts, different activities throughout the day," said Juneteenth Committee Chairman, Brian Jackson.

Jackson was one of the organizer's behind Saturday's event.

Temperatures climbed to a whopping 119 degrees on Saturday, and people still made it a point to come out and celebrate.

"What I’m looking forward to is experiencing a different cultural type of experience than I normally have in my life as a 77-year-old white woman and I think this is good for me, I think it’s good for all of us," Palm Springs resident, Margaret Manson said.

The new holiday marked the end to a dark chapter in American history.

Spencer is also the son of an original Tuskegee airman. He said he learned about Juneteenth for the first time in 1980 while he was living in Dallas, Texas.

"Once I learned that history, I traveled from the east coast to the west coast, it still wasn’t celebrated nor was it acknowledged so I think this is a wonderful day for America -- for all people to have an independence day, which is Juneteenth," Spencer said.

In 1865 federal troops arrived in Galveston, Texas to ensure all slaves were freed and about two and half years after the Emancipation Proclamation.

"With it being a federal holiday we hope and pray now that it’s going to be talked about inside all our school classrooms across the nation," said Jackson.

While Saturday's event was a celebration, it was also largely about education.

"We still have a long way to go, this is a good step in the right direction," said Palm Springs resident, Lanasha Toland. 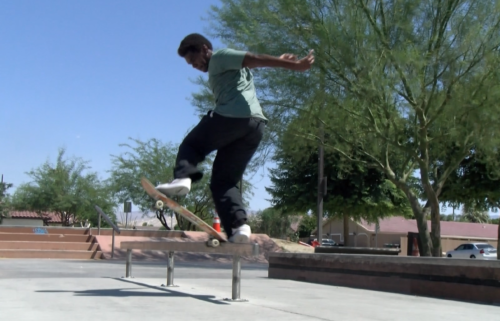