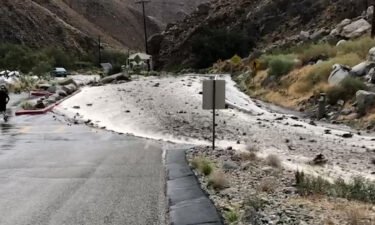 A Palm Springs man was arrested and charged Monday morning as part of an FBI investigation into weapon and drug distribution.

Multiple police agencies, including the FBI, were outside of a home on Deepak Road in Palm Springs Monday morning. Neighbors said authorities have been at the home since at least 6 a.m.

Neighbors told News Channel 3's Madison Weil at the scene that they woke up to the sound of multiple flash bangs with law enforcement demanding someone exit the home.

“I was kind of startled. I went to look out and didn’t see anything. But it seemed close," one resident said. "This is the first time I’ve ever seen activity here in the 20 plus years I’ve been here.”

When News Channel 3 crew arrived at the scene, there were several people detained. Five women and at least three men were taken away by police. A spokesperson for the FBI identified one of the people apprehended as Tylor Britten Murray, 27, of Palm Springs. Murray has been charged and is expected to appear in federal court in Riverside sometime around 2 p.m.

Check Out the Affidavit with details on Tylor Murray's chargesDownload

The FBI confirmed that four additional residents were arrested on local charges. There was no word on what those charges are at this time.

Murray was originally arrested on February 3, 2021 near Sky Valley.

During that arrest, sheriff's deputies seized nearly an ounce of cocaine, 399 Xanax pills, nearly 6 1/2 pounds of marijuana, $7,600 in cash, several guns and other items, according to an affidavit prepared by FBI Special Agent Krista L. Gonzalez and filed with the court.

Robert Lorenzo Lee Ramos, 24, was also arrested along with Murray on Feb. 3.

Ramos is accused of using social media to post photos of himself with guns and to market drugs for sale.

Ramos was indicted in federal court last week and will return to court on August 31.