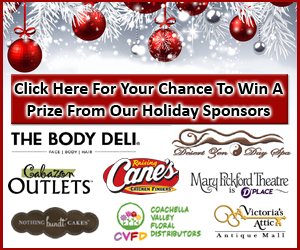 Saturday marked the 30th anniversary of Wreaths Across America, a day to honor those who died in service to our country.

The local Cahuilla Chapter of the Daughters of the American Revolution hosted the ceremony.

Our nation’s heroes were remembered as each name was said aloud and honored as over 525 truckloads of wreaths were delivered - representing 390 different carriers.

Over 2 million volunteers, a third of whom were children, helped placed more than 2.4 million veterans’ wreaths on headstones of our fallen across the country.

Each live, balsam veteran’s wreath was a gift of respect and appreciation, sponsored by an individual or organization and placed on a headstone by volunteers as a small gesture of gratitude for the freedoms Americans enjoy.

For centuries, fresh evergreens have been used as a symbol of honor and have served as a living tribute renewed annually.

Wreaths Across America believes the tradition represents a living memorial that honors veterans, active-duty military, and their families.

Another major goal of Wreaths Across America is to teach young people about the sacrifices their ancestors made for their freedom.

In 2020, there were wreaths put on 1.7 million veterans’ headstones at 2,557 participating locations.