With this elections' California primary set for months earlier than the last, Sanders made clear he and his campaign intend to focus on the Golden State.

He answered questions about his presidential plans affecting people locally, like homelessness.

"We are the richest country in the history of the world and that is why I have proposed a massive housing construction program that will build low-income housing and affordable housing that we need," Sanders said. "We need to build housing and when we do that, we're going to put a lot of people to work at good paying jobs."

"Re-establishing legal statuses for the 1.8 billion people in the DACA program and their parents," Sanders said "Raising the minimum wage to a living wage, making healthcare a human right not a privilege is something that appeals to everybody certainly including the Latino community."

He also spoke on income inequality, an issue that some say affects issues in the east valley like a month-long mulch fire burning next to schools and a mobile home park with arsenic-contaminated water.

"What would your presidency do to address issues like those," Ingrassia asked.

"Start paying attention to the needs of working people and lower-income people not just billionaires," Sanders said. "We have to change the priorities of this country and that is we have to strengthen to EPA, not weaken it."

"Senator, you are very proudly a progressive candidate, but some would say that you are too far to the left to reach moderate or undecided voters. How are you going to secure their votes," Ingrassia asked.

"I think the issues that we are talking about are precisely the issues that working families are concerned about and that's why I believe we're going to win here in California, win the nomination and defeat Trump," Sanders said.

Sanders was in town for two rallies in the Coachella Valley.

At around 5:30 p.m., Sanders opened his new campaign office in Coachella to a crowd of supporters. During his 10-minute speech, he spoke about immigration and helping Dreamers. The Coachella City Council announced their endorsement of Sanders for president.

Sanders is scheduled to take the stage Thursday in a democratic debate at a university in Los Angeles. However, his' campaign said Monday he will not cross the picket line of food service workers protesting there.

He is also holding events in Moreno Valley, San Ysidro and Los Angeles later this week.

Sanders is not the first presidential hopeful to visit the desert this year. Indiana mayor Pete Buttigieg appeared at a private event inside Rancho Mirage's Thunderbird Heights last month. 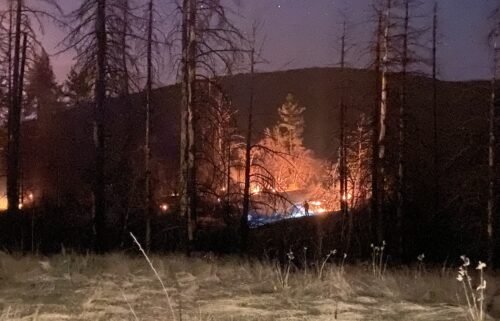