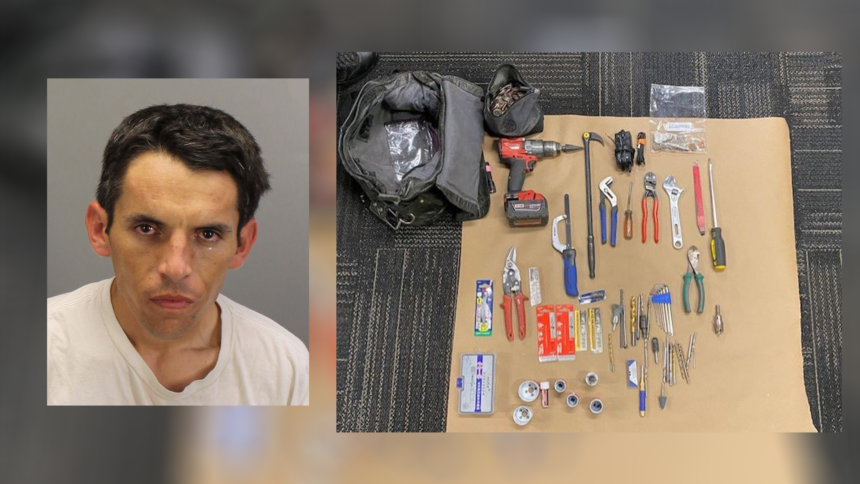 The Palm Springs Police Department announced Friday that they had arrested a man earlier this week who was allegedly found in possession of "hundreds of dollars in quarters" and burglary tools that seemed designed to break into coin-operated machines.

On Wednesday at 3:45 p.m., a patrolling officer spotted a man, later identified as 31-year-old Nathan Tapia of Cathedral City, peeking over a residential wall near the intersection of Calle Palo Fierro and North Riverside Drive in Palm Springs.

The officer spoke with Tapia, who reportedly "provided...a story that didn't make sense," according to PSPD. Further investigation revealed that Tapia was on parole for burglary and that he was in possession of a bag of several tools that were used to cut and drill into metal.

The tools appeared to have been used for breaking into laundry machines, vending machines, and other coin-operated machines

Tapia was also allegedly found in possession of "hundred of dollars in quarters."

Tapia was arrested on suspicion of possession of burglary tools. An outstanding warrant and parole hold was also issued for Tapia, per PSPD. He was booked into Larry D. Smith Correctional Facility in Banning. He is being held on no bail, according to county jail records.

"The Palm Springs Police Department is asking for any business or location that may have had their vending machines broken into recently, to review their surveillance camera footage and or notify PSPD investigators, if you had a similar loss, to our burglary investigations unit at 760-778-8406," read the PSPD release on the incident.

Tapia is set to appear in court on January 16 at an unspecified location, per jail records.