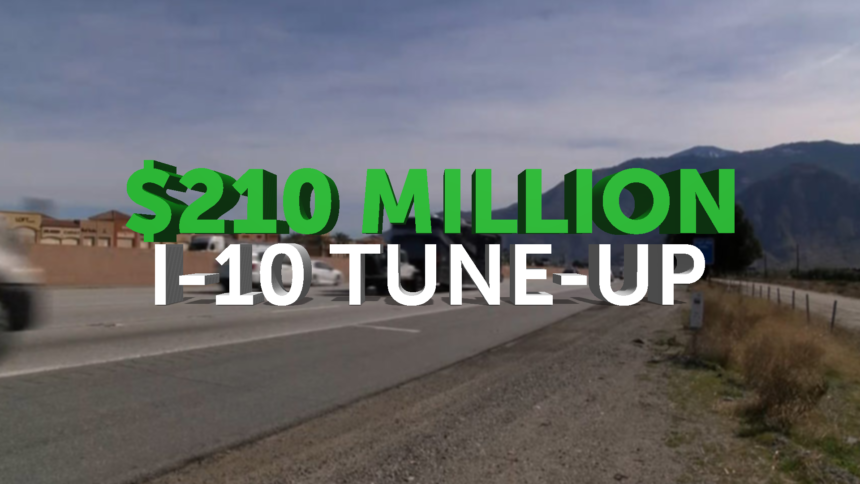 Interstate 10 could be reduced to one lane in each direction this morning and again tonight as crews install protective barriers for a construction project scheduled to last almost three years, Caltrans officials said.

The I-10 Pavement Rehabilitation Project, dubbed the I-10 Tune-Up, is a three-phase project spanning nearly 20 miles from Pennsylvania Avenue in Beaumont to the Highway 111 interchange in Palm Springs that Caltrans warns will bring sporadic traffic delays.

Crews tonight will wrap up installing protective barriers for workers from 7 p.m. to 6:30 a.m. No work is planned for Friday through Monday for Presidents' Day weekend, according to Caltrans.

Only lane closures during the nighttime hours are currently planned, said Terri Kasinga, a Caltrans spokeswoman.

Crews will upgrade guardrails, repave lanes number 3 and 4, replace slabs in lanes number 1 and 2 and upgrade various on- and off-ramps to comply with the Americans with Disabilities Act.

Construction began earlier this month and is scheduled to wrap up by the end of 2022.

The first phase spans from Eighth Street in Banning to Main Street in Cabazon, and will involve the eastbound lanes first. The next phase will include roadway between in Beaumont and Banning, and lastly, from Cabazon to Highway 111 in Palm Springs.

The $210 million project is paid for predominately with Senate Bill 1 money, also known as the ``gas tax.'' The remainder is through federal funds, as well as a sliver of additional state funding, according to Caltrans.

Temporary crossover lanes will be constructed at times, which will include thinner-than-traditional lane widths. The speed limit will also be reduced to 60 miles per hour.

For more information, visit www.i10tuneup.com and sign up for project alerts, or call the construction hotline 833-i10-TUNE.