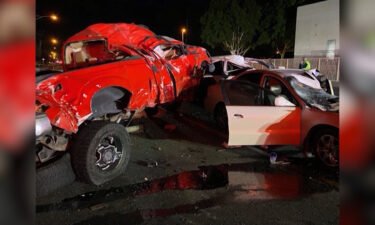 He even went as far as to playing golf and baseball in the same season. At one point, he had played a game nearly every day for three straight weeks.

“I probably won’t move on and play sports in college and stuff, so I’m just, kind of, trying to take advantage of everything I can do right now,” Mauerman said.

“It takes also a lot of adaptability to be able to go from a baseball swing and then turning around a couple days later having a golf match,” said Palm Valley baseball and cross country coach Wes Williams.

In addition to his own busy schedule, Mauerman helped coach the middle school football team and he spends time volunteering at animal shelters alongside his grandparents.

“I love animals, it’s kind of weird because I’m a hunter and everything,” he said.

Mauerman’s family roots are in Washington. That’s where he spends his summers, outdoors, hunting and fishing.

Those skills then translate to all of his sports.

“No matter what sport he’s doing, he’s just a very competitive person and he wants to win,” said Williams.

A true student-athlete, Mauerman excels in the classroom, with a GPA above 4.0. He’s planning to go back to the Pacific Northwest for college and major in some form of environmental science.