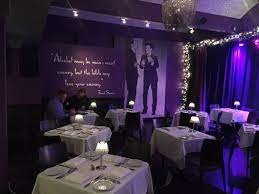 The stage is quiet.

The tables are empty, and so is the bar at the Purple Room on Palm Canyon Drive in Palm Springs.

Having hosted stars in the past, the place has been closed for 13 months because of state restrictions ordered in response to Covid-19.

"There are no answers right now. As I've said before. When this started we thought it would be three weeks. It's been 13 months," said owner Michael Holmes.

Holmes bought the place back in 2015.

Prior to to the pandemic, he says the supper club was frequently hopping with live entertainment and a loyal clientele.

After laying off 32 employees, and no longer employing a dozen musicians, he's hoping to open the doors once again Labor Day weekend.

News Channel 3 asked Holmes, "What has been the key to getting through this?".

"Other than tequila, my friends, my family and my friends, and the staff here at the Purple Room," said Holmes.

Holmes says the place opened in 1960.

He says it was the place where the rat pack first performed together on stage.

A GoFundMe campaign could make the difference in whether Holmes opens again.

Roughly halfway to the goal of raising $240,000, it was started by Palm Springs resident Sue Cameron.

She is a former columnist for the Hollywood Reporter and a Purple Room patron.

"It's a magical hideout everybody knows about it, but it feels like my special place and that is why it absolutely cannot close," said Cameron.

He hopes to hang on until fall.

Holmes says that's not enough to turn a profit.

There is no space available for outdoor dining and he doesn't do take out.

Holmes and Cameron say they'll do whatever it takes to prevent closing for good.

"I will fight with tooth and nail, everything I have, not to let that happen," said Holmes.